Evidence of bugs was not as large this May Day as it has been in the past; however some interesting 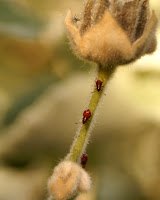 tiny things were out parading around or just basking in the sunshine:


These small red bug nymphs could be a lot of things, but they look like those in this entry for niesthrea louisianica, a scentless plant bug, found on Bugguide. The guide contributor mentioned the bugs were found on althea, or rose of sharon, which is in the mallow family. My tiny red bug nymphs were found on and in the seed capsule of abutilon palmeri, another mallow. I'll have to dig out photos from last autumn of later-stage nymphs and maybe adults in the same setting that I remember resembling these niesthrea, and compare.


Nearby, on the l

eaves of the same abutilon plant, were a few very tiny black and white nymphs. That looks like a shed molt next to this one in the 2nd photo, so this could b

e a second instar nymph, of some sort of bug. I'll be keeping an eye out for the developing stages of these; hopefully they won't disappear from the backyard ecosystem as species sometimes do.

The third photo is of a shed exoskeleton of . . . . a teeny tiny bug of some sort. 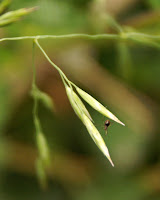 Last we have an aphid doing a trapeze act between two grass flowers. Could very well be a rose aphid.
Posted by vanessa cardui at Tuesday, May 01, 2007