A quiescent Fly, for your consideration 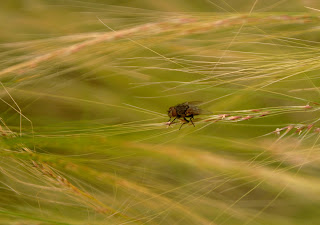 Sort of early on a recent morning, an on-shore flow or coastal-eddy kind of morning that seems earlier than it is for the lack of sunlight; that makes you feel more sluggish than you really mean or need to be that early in the day; that feels kind of good to be out in but really makes one think of hot coffee or the slowly cooling bed you recently got out of; on a morning like that I noticed this fly sleeping in a clump of feather grass.

What is sleep, many people still ask, and how could I know this fly was sleeping? There is some interest in the sleep research field in the rest or quiescent or (dare we say) sleep periods of fruit flies. Studies seem to suggest that yes, they do experience a state in which they are difficult to rouse; 100 times more difficult, one researcher concluded. It's hard to measure the brain waves of flies, but people have observed the quantity of "rest" periods partaken by fruit flies (drosophila melanogaster) which have experienced varying levels of activity during their day. Apparently, a fly that had a busy day would then spend more time in a low-response, quiescent state than a fly with a duller day. Huh! But is this the same state we humans experience (but, alas, do not yet understand) and call sleep?

I don't know what kind of day this particular fly had previous to the sort of early morning on which I observed it; but I had to bug it quite a bit (maybe 100 times more than normal) before it moved, flying lazily to a nearby shrub. Of course, the cooler air and fly-body temperatures affect its ability to fly. Does that to me, too. Research goes on, using fruit fly subjects to test drugs and hypotheses about sleep. But, is it wise to presume that human sleep, poorly understood as it is, is the only kind of sleep in the animal kingdom?
Posted by vanessa cardui at Monday, May 21, 2007