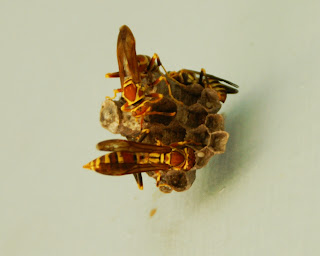 In the first part of June we had a party at our house and several guests made comment about the guardian of the door. For the most part the comments were unfavorable, but there were no incidents involving stinging so life went on with the wasp nest above the front door. By the end of June there were four adult females working on expanding the nest. Were they getting testier or were we intimidated by their growing numbers? I'm not sure but at this point the decision was made to get rid of the porch wasps. My husband used a product called Wasp Freeze to kill them, then washed down the porch concrete and that was that.

I should never have allowed the first wasp to build her nest there. She didn't have a fair opportunity to fulfill her reproductive life, given the ambiguity of our providence of porch. Next time I'll discourage such a wasp at the first sign of her nest.
Posted by vanessa cardui at Saturday, June 30, 2007