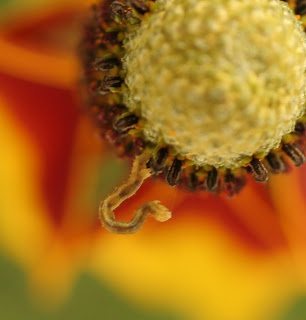 I was reading the public notices in the newspaper recently and noticed the name of one of the moms from the gang at my daughter's elementary school years ago. She was opening a garden shop, so of course I made a point to go check it out. And what do you know? She had in stock one of my favorite but harder to find plants: Ratibida columnifera, a coneflower with flowers resembling cute little mexican hats. Just a day or two after I planted them in the yard I noticed a crop of tiny looper caterpillars grazing on the cone-shaped receptacles full of disk flowers. Many smallish, greyish or brownish adult moths fly out from under the garden foliage whenever I walk by, and they wasted no time taking advantage of the fresh resource I brought to them.

The caterpillars pictured here are in the Geometrid family, named for the caterpillars' mode of locomotion: Geo (earth) + metron (measure). These are the so-called inchworm 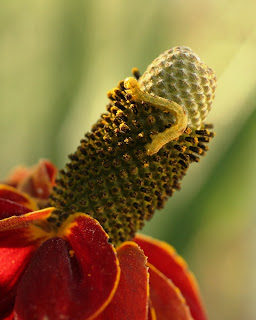 s. Lacking all but two pairs of abdominal prolegs, a geometer caterpillar moves by releasing the front six true legs, stretching the body forward and grasping the substrate, then releasing the back legs and moving the back end up to meet the front with the body looped in between the sets of legs. There are over 1400 North American species in the family; these are likely to be in the genus Eupithecia, affectionately known as "pugs".
Posted by vanessa cardui at Thursday, July 05, 2007