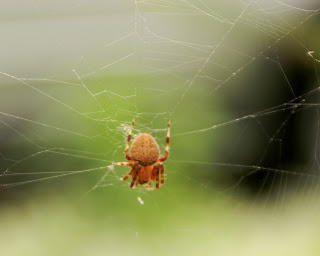 So the dog days lope to a close, and to celebrate I almost stumbled into an orb web strung across the garden gate opening. This time of year, these spiders start to come into their own as they are growing fat on the summer's insect harvest. They won't be really huge until autumn though, saving their scariest spiderliness for the darker days of the year. This is a medium sized (5/8" or so) Neoscona, maybe crucifera. While I was watching, an unfortunate leafhopper landed in the web, and the spider made quick work of wrapping this morsel up for later. 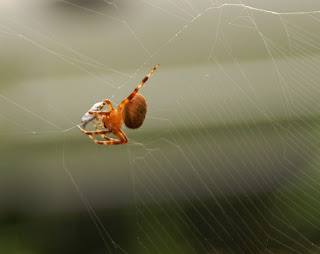 Btw, I found the nest of the humongous Phidippus audax; it's full of tiny black spiderlings. It should be great fun when they venture out. I also found another Latrodectus geometricus, brown widow. This one has built a very nice lair out of some leaves and silk which is suspended in the same tree as the phidippus' nest. While I'm glad she's not on or near the house, I hope she doesn't kill too many of the young bold jumpers. The green lynx are maturing; the funnel web weavers are working overtime to cover the shrubbery with silk, there's small shiny jumping spiders making the most of everything that visits the composite flowers, and small not so shiny jumpers patrolling the foliage; crab spiders camouflaged and not so much so, and the pholcus phalangioides annoying everyone with their cobwebs. So many spiders; so little time. 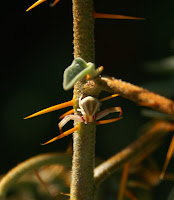 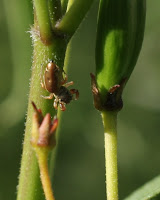 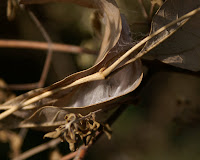