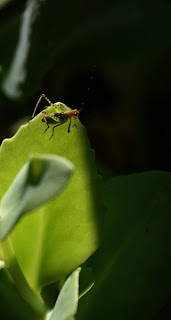 There are a fair number (not an explosion, more of a soft pop) of young katydids out now in various stages of development. We've had an unusually hot and humid summer, which has tuned itself down just now (over the past week) into a pleasant (mid 70s, sunshiny) autumn. Two years ago in November there was a large number of young nymphs present. Last year, not many at all showed up through the summer and fall. In early 2006 I removed an overgrown clump of lemon grass which the katydids favored for egg laying as well as feeding. In summer 2006 I released chinese mantids into the environment. Hard to say how much these two events effected the katydid population; with superficial unsubstantiated evidence of population fluctuation in hand it would be simple to conclude the events drastically impacted katydid numbers in the short term; but making that assertion would just be wrong.

These hatched eggs are on broom corn, from seeds I bought from Native Seeds/Search in Tucson. They sell seeds of crops traditional 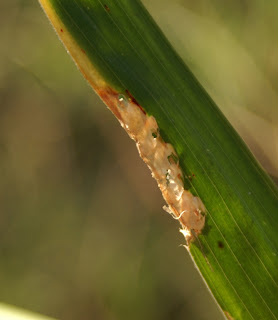 ly grown by native people of the southwest. The seeds I planted years ago have formed clumps that come back year after year, produce lots of decorative seed heads, and provide habitat for various creatures including katydids. The seed heads work pretty well for sweeping, too. I haven't tried the beer making; yet.

Apparently, a few of the young katydids hopped off the sorghum onto a nearby sedum 'Autumn Joy' that was just coming into bloom. Since katydid nymphs eat flowers, this was a fortuitous landing into a bed of burgeoning food. It also made for a pretty picture. 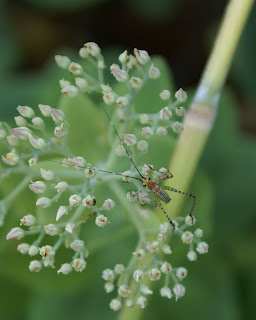