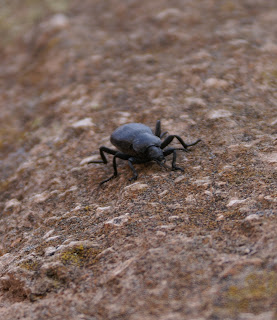 Over a million years ago a volcano in central New Mexico erupted with a force said to be 600 times that of the recent Mt. Saint Helens event. Ash fall from this cataclysm formed the 1000 foot thick Pajarito Plateau, compressed into a soft stone called tuff. As time passed, what we today call Frijoles Creek cut a canyon out of the soft plateau. People seemed to like the place and by about 1100 AD, deciding to settle down there, they began carving shelters into the soft canyon sides and building structures out of blocks cut from tuff. These people stayed for awhile, but after they left other settlers arrived and liked it too. Late in the nineteenth century a guy named Bandelier "discovered" the ruins of the old pueblos and cliff dwellings, and soon the place was a national monument. On a sunny day in August 2007 we visited the monument and liked the place pretty well, too. On our hike we came across this Eleodes beetle walking down the tuff wall of the Long House. Although these beetles have probably been inhabiting this area for all of this time and more, (except maybe during the volcanic explosion) I'm not sure anyone really knows where they are going and what they are seeking as they pursue their wanderings.
Posted by vanessa cardui at Sunday, September 09, 2007