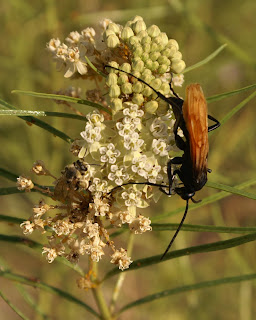 The state insect of New Mexico is one of the many species of tarantula hawk. These are wasps in the genera Pepsis and Hemipepsis. The female will hunt a spider, often a large hairy spider (hence the common name), drag its paralyzed body to an underground cell or leave the spider in its own nest, then lay a single egg on it. The spider serves as food for the larval wasp until its emergence as a nectar-feeding adult. I was recently in New Mexico and had the thrill of seeing many species of tarantula hawk, often feeding at the same flowering shrub.

We were driving back to the highway after viewing the Three Rivers Petroglyphs, and I noticed these roadside milkweeds covered with large black blobs. Of course we stopped, and discovered these wasps, as well as numerous other pollen- and nectar-feeding species in a cloud around the flower clusters. The wasp in this photo I believe is a hemipepsis and not the state insect (which is Pepsis formosa). One difference between these genera is the strong bluish irridescense of Pepsis, which is lacking in this specimen. If what is true about Pepsis antennae applies to this species, this one is a male since the antennae are straight; the females' antennae are curled.
Posted by vanessa cardui at Saturday, September 01, 2007

Yes, often the highlight of a trip, usually unplanned and always something new.