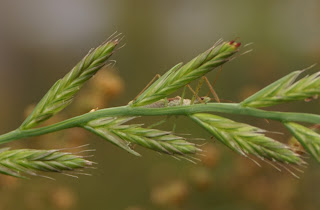 I think I mentioned already that I got tired of the obligatory strip of lawn in the no-man's landscape known as the parkway strip in front of our house, and replaced it with a garden this summer. We just undercut the existing sod (which had been a perennial rye/fescue mix when it was laid down a few years ago), removed it, threw down some random seeds that were lying around and some topper. I added a few container plants, and quite a few volunteers came up too, including some of the perennial ryegrass (Lolium perenne) that sprouted, and is now flowering. Mixed in with the flowers and perennials, it looks as good as some pricey ornamental grasses. Here is an assassin bug nymph (Zelus sp.) grokking the goodness that is a ryegrass flower spike.
Posted by vanessa cardui at Saturday, November 03, 2007