Where Flies and Flowers Meet 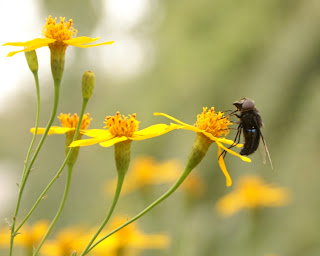 The syrphid fly Copestylum mexicana, Mexican cactus fly, lays its eggs in rotting cactus, often Opuntia, where the larvae grow and develop in the moist and warm environment. The adults feed on nectar. Somewhere near here there must be a rotting cactus plant where these flies hatched, fed, grew up and emerged as adult flies hungry for nectar. They showed up promptly as the Mexican marigold (Tagetes lemmonii) bloomed in my yard. These flies are wary of people with cameras but still spent considerable time nectaring while I took these photos.

Attracted to the same plant are Eristalinus taeniops (another large syrphid fly) in a similarly uncanny way. The larvae of tha 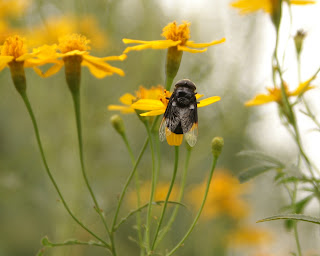 t species is said to live in stagnant water, a commodity none too common in the state of drought in Southern California. The unlikelihood of nearby breeding sites added to the relative rarity of this fly and their appearance coinciding with the sudden recent bloom of the marigold all suggest that this plant is highly attractive to these flies. E. taeniops is from Africa and was very recently recorded in California as noted at Natural History of Orange County.

Two flies walk into a bar. The first one says, "Ouch. I never thought they could lower the bar that far." The second one replies, "Why are we walking; we're flies!"
Posted by vanessa cardui at Wednesday, November 07, 2007

Yes, note to self: Add rotting opuntia cactus to our next neighborhood treasure hunt list.