Predator, Scavenger, or just a Coincidence? 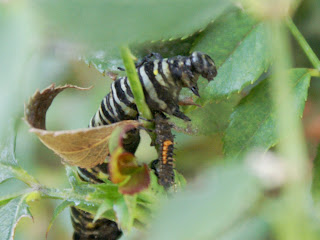 One of the monarch caterpillars crawled up a rose bush to pupate. It spun its silk cushion, seemed to attach alright, and assumed the J position. It hung there for days--way too long--until its body let go the silk foundation and dropped down to the next leaf node, unmoving. This Asian ladybird larva, Harmonia axyridis, was displaying interest in what I assumed was the caterpillar's corpse. Do insect predators feed on recently dead carcasses? Or, possibly this caterpillar wasn't quite dead. Still, is it something you would expect or even imagine: that a ladybug would eat a butterfly? Could it be the monarch (having fed on milkweed) smelled like oleander aphids, and so the ladybug was misled into sensing the caterpillar was its normal prey? It is hard to believe any insect larva, given their hectic schedule of eating and molting and growing, have time to simply stop and smell the caterpillars for no apparent reason.

By the way, the caterpillar seemed healthy prior to its demise. Plump, well-colored, feisty. No idea why it failed to pupate.
Posted by vanessa cardui at Wednesday, January 02, 2008