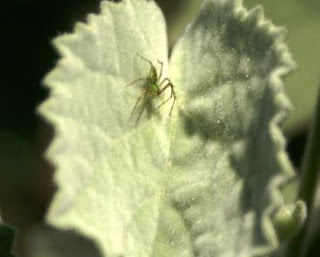 I suppose there was someone named Palmer who first classified Indian mallow and so got the thing named after himself. But green lynx spiderlings---tiny ones---and lots of them---have staked out the centers of abutilon leaves, nestling down in the safety of their palms so to speak, in such an uncanny way it's almost like they know about the value of being held close in someone's hand. Reality is so much more interesting than some guy named Palmer coming along and naming the plant. Of course it's possible Palmer noticed the spiderling phenomenon, too, and felt how weird is it that he should be so named and how did those spiders know?

Anyway, like I say there are large numbers of these tiny youn 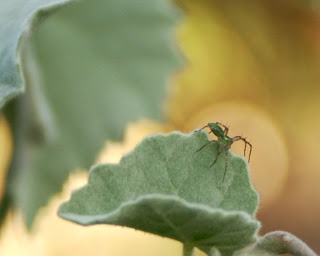 g peucetia viridans on the Abutilon palmeri right now. They are feeding on some black aphids that have colonized the undersides of the abutilon leaves. They do sometimes move away from the centers of the leaves of course, but in mid-day it is truly surprising how many of them there are in Palmeri's palms.