March of the Chenilles 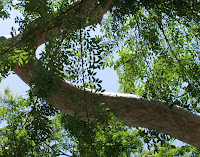 Our street is lined with ulmus parvifolia, a favorite food plant for spiny elm caterpillars. These tall semi-evergreen elm trees shelter untold numbers of caterpillars while they feed and grow until one day, sometime in spring, the now-mature larvae heed the age-old mantra of their elders in the lepidopteran clan: "Don't pupate where you last pooped". So the spiny elm caterpillars leave the trees in sometimes alarming but in our case pleasant numbers. 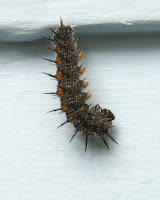 henilles. The caterpillars often climb house walls, as did this one seen hanging upside down in the characteristic "J" p 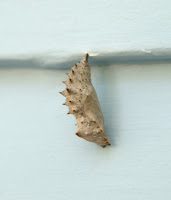 osition from a hook at the end of its abdomen inserted into a little silk pad on the wall. This picture was taken in mid-morning on Sunday. On Monday morning about the same time there was no change, but an 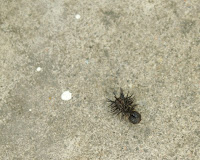 hour later the last shed had occurred and this chrysalis was hanging from our newly-painted wall. Below in the duff I found the last trace of the former caterpillar, its shed head capsule. 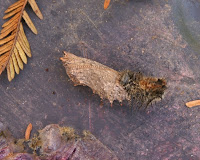 A partially molted chrysalis was found in the street, presumably fallen from the tree above. Maybe a gust of wind broke it loose, or the silk pad wasn't well-made, or maybe this one was just unfit in the Darwinian sense. It was still alive, wriggling as we handled it, but doomed to die since it could not shed that last bit of its former self. 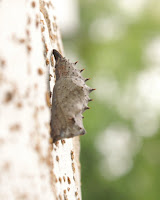 Some of the caterpillars pupate on the tree. We wonder: do they climb down from another elm tree, cross the neighbors' parkway strip and our driveway then encounter our tree and climb up to pupate? Sadly, we don't have little tags on the caterpillars nor were we watching long enough to see where these two came from. The pupa had alr 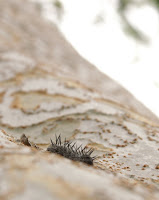 eady formed on the trunk of the elm when we noticed it; the second caterpillar was heading up the tree when we saw it, and soon climbed out of our eyesight.

And we found one more climbing a different but also freshly painted house wall, but it soon dropped off. This could have been because the siding on that wall runs vertical and so did not offer the caterpillar a good niche to secure itself to. Anyway, we couldn't resist interfering and so picked it up and put it onto a nearby tree-like plant. It crawled around o 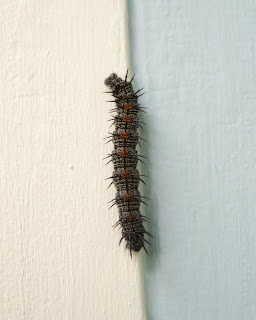 n there for awhile, then we lost track of it. Since the wandering caterpillar's need to pupate is urgent, surely it found a spot to its liking somewhere around the house.

In about 2 weeks or maybe less given the hot spell of weather that just started mourningcloak butterflies (Nymphalis antiopa) will emerge from the successful pupae. Tidbits about this species: the adult butterflies overwinter and often are seen in flight very early in what we here call spring; yes the spines of the caterpillars are said to cause skin irritation but I've never touched one (because of the scary-looking spines) and so can't confirm that; the experts claim the adults' preferred food is tree sap, or the juice of rotting fruit but I've never seen them feeding on that; mourningcloaks are one of our most common and widespread butterflies, behind Vanessa cardui of course; although the caterpillars have earned pest status in agricultural literature, our elm trees never suffer much, in fact the caterpillars maybe keep the trees in check.

I probably should have known this already, probably almost everyone does, but I just learned that "chenille" is French for caterpillar, which is a brilliant bit of lexicon.
Posted by vanessa cardui at Tuesday, April 08, 2008