Funereal Sighting, and a Golden Bee 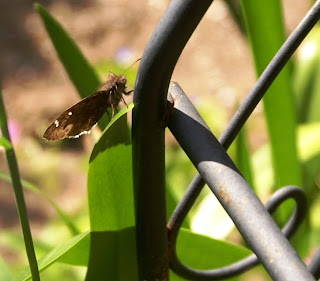 I was out back checking the contents of the storage trailer yesterday when something I disturbed erupted out of the lantana and flew past my nose. I thought it was a moth at first but then it moved again and I saw it was this funereal duskywing, Erynnis funeralis. Although these skippers are recorded flying in OC from February on, I don't see them in my garden until spring is well underway. This is the first one I've seen this year.

Same afternoon, the resident male carpenter bee (Xylocopa varipuncta) was cruising the airspace over the back garden (and possibly the front as well) and the only evidence I could capture was this blob of gold passing the neighbor's bougainvillea. I've been seeing these bees, both m 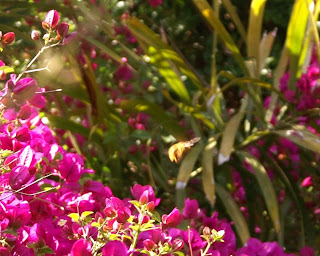 ale and female, for several weeks now but not in large numbers, just one or two here and there.
Posted by vanessa cardui at Wednesday, April 21, 2010

Carpenter bees are my favorites! Any chance you've seen something bigger than a carpenter bee, all golden and buzzing about a Rhus ovata? I need to bug guide it- it was a wonder to behold and I must find out what it is!

Christine and others may want to check out this site;

for more info about the three species of Carpenter bees. They are my favorites too.

X. varipunctata is the goldenest, buzzingest, biggest bee in my territory, so I'd sure be interested to find out what your even bigger bee is, Christine. Thanks for the link, Cynthia. Another great resource for bee info is found at http://ucanr.org/blogs/bugsquad/ I also reference http://nathistoc.bio.uci.edu/Arthropods.htm which is a compellation of insect species actually found in Orange County.