Another good place to walk is the Laguna Coast Wilderness Park, though we must oxymoronically drive there to walk, on an early Sunday the bugs and the plants and the fresh ocean air were worth it.

We parked our vehicle at gate 6, and proceeded to follow Laurel Canyon Trail, a pleasant stroll thro 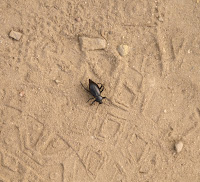 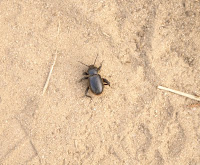 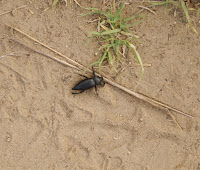 y meadows, past sandstone outcrops and caves, punctuated by plenty of beetles crossing the path. The trail then begins to climb to an ultimate lovely overlook of the San Joaquin Hills Tollway to one side and the trail leading on to the other, a short spur that dead ends at a tee: the way back or the way up.

As usual, Mr. Cardui wanted to go up and so we continued a short way to what turned out to be high ground, the top of a ridge from which the rest of the park falls gently to the ocean. We felt a definite difference in the air as we crested the hill, the ocean breeze flowing up and cresting over the top, then mixing with the slightly warmer, staler air on the land-ward side of the rise. Gr 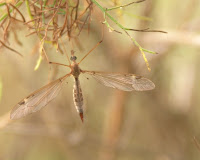 anted, this high point is only 875 feet in elevation, but even we humans--sensory dullards that we are--could discern a difference, an ecologic advantage maybe to being at the top. At the very least we could tell the hilltop was a special, maybe even sexy, place.

My eyes started to see insect movements in the California sagebrush (artemisia californica) there at the top and, what do you know? The shrubs were loaded with crane flies rising into the morning sunshine. As I moved in close for a photo, I noticed a metallic green thing, then another, another, good grief the sagebrush was full of them, too. These are beetle larva of genus trirhabda, a group of leaf-eating beetles that is as hard to identify to species from the larvae as it is hard to pronounce. According to this citation at bugguide, trirhabda beetles tend to exclusive feeders, and so the plant they are feeding on helps with the ID. In this case Artemisia californica narrows the choices down to 5: t. nitidicollis, t. pilosa, t. sericotrachyla, t. con 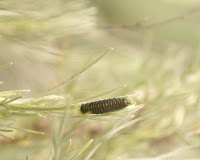 
We hope to return to this particular hilltop to see if the adult trirhabda are there, but also because it felt so good up there.

Hilltopping is a behavior exhibited by many types of insects, primarily as a way to find mates but also take advantage of easy prey, and possibly lay claim to some sexy territory to live in. Check out Bug Eric's post on his observations of hilltopping in Tucson.
Posted by vanessa cardui at Thursday, April 29, 2010