Spiders and Their Webs 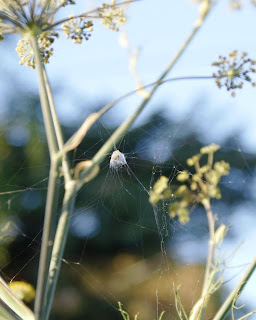 Here are two interesting spiders that inhabit my garden but whose names I still don't really know. The 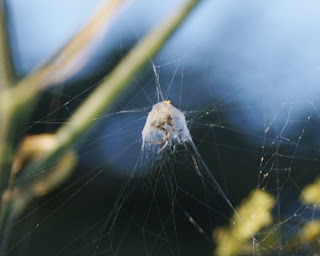 first one I believe is a trash line orb weaver (Cyclosa sp), but the ones that I have don't create a well-defined line of trash in the middle of the web (as in cyclosa turbinata). They do weave a loosely-organized orb web, and near the center they build a little conical shelter, adding trash to the roof as time goes by. This one has just started its shelter near the top of a bronze fennel plant in the parkway. The first photo attempts to show the three dimensional web architecture; in the second you can see part of the spider as it hangs out in its shelter in a characteristic way. 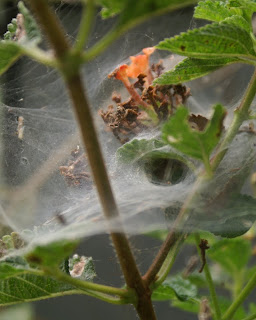 Then there are the funnel web spiders. This one has built a beautiful web and funnel-shaped lair in the lantana along a wood fence in the back garden. At first I thought I'd have to settle for a 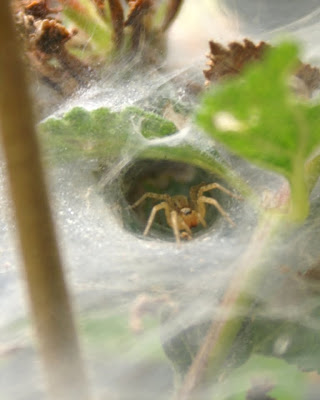 picture of just the web sans spider. But I tapped the back of the funnel gently and the spider popped out the door. I believe these are hololena, not sure the exact species. 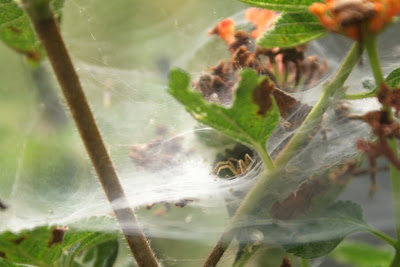