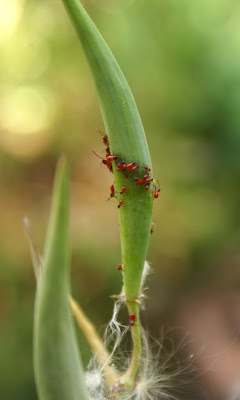 Where there were mating milkweed bugs (Oncopeltus fasciatus) there will be a horde of developing milkweed bug nymphs. First a group of very young ones is seen spiraling up a milkweed seed pod. Every source says these bugs feed on the milkweed seeds but I think maybe they feed on the softer tissue of the plant as well; these young ones appear to be sucking on the tender green pod. In order to be feeding on the seeds, their mouthparts would need to pierce through the pod wall and the surrounding fluff to the developing seeds inside. Are their young mouthparts that long?

The growth rate of the nymphs does not seem uniform. You often see groups of mixed stages of development as seen here. I found an abstract of an old article (1976 Oecologia, Natural Food Requirements of the Large Milkweed Bug . . . by Carol Pearson Ralph) that suggests: A. When the seedpod wall thickness prevents the bugs from reaching seeds, O. fasciatus feeds on the plant tissue; B. Nymphs of the three youngest stages often cannot access the nutrients inside the seedpod due to their short mouthparts and so suffer slower growth due to poorer nutrition. Reproduction is also slowed by a vegetative diet. C. It was observed that all ages of bugs seek out the thinnest pod walls; and D. nymphs in larger groups suffered lower mortality rates than those in smaller groups.

The bugs here have aggregated on two sides of a leaf, while one of them separates from the rest to undergo its final molt to adulthood. The freshly exposed new exoskeleton is light colored and will darken and develop the adult markings as it cures in the air.


The aposematically colorful peanut gallery looks on; you can barely see a tiny solid red one tucked und 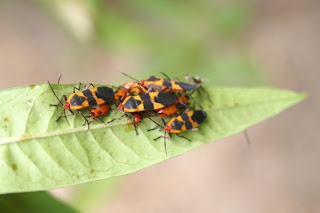 er the middle of the rest of the more mature mixed-aged group.


After molting, a black and white transparent shell is left behind on the leaf. 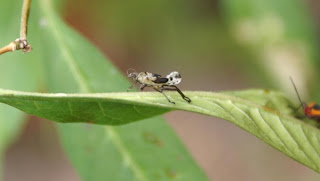 Milkweed bug in a paradise of seeds. It pierces a seed with its long beak to feed. Yet unanswered: how does the bug pierce a seed suspended in 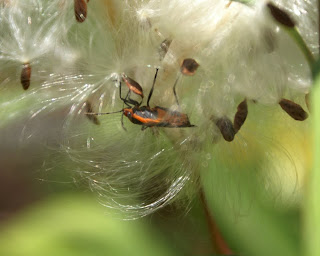 mid-fluff given there is no leverage against the seed?
Posted by vanessa cardui at Tuesday, August 31, 2010

Wow, that last photo kinda makes me wish I was a milkweed bug... so fluffy and lovely. I'm very impressed you actually find what you're looking for in those crazy abstract papers- I'm usually totally lost!