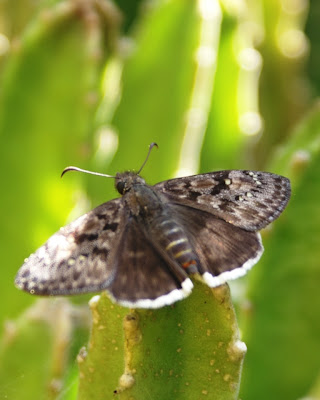 Here are some scenes and species captured across the estate late this month.

This bagrada bug, Bagrada hilaris, was found on the old Alyogyne huegelli bush.  Bagradas have been found on plants in the cabbage family such as alyssum, all of the cabbagiferous food crops, mustard and such.  So this one hanging out on a mallow family member is curious. 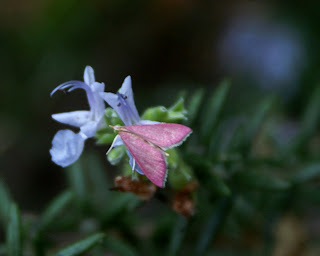 Small pink moth, Pyrausta inornatalis, chilling on the prostate rosemary in the morning relative chill.  I love it when I google something as intuitive as "small pink moth" and get (in less than a half a second) the information I was looking for.  Other common names for this one are Southern pink moth and, sadly, Inornate Pyrausta moth.  No information on what the caterpillars eat, however; I suspect they are a general plant feeder maybe going for members of the mint family. 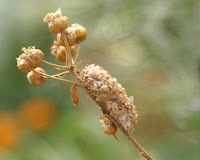 Mystery coccoon found on mystery plant.  This is a good size affair (about 1" long by 1/4 " thick) made of the fluff from this daisy family plant that I haven't been able to identify yet.  Fullerton Arboretum clearance sale I praise yet curse thy name! 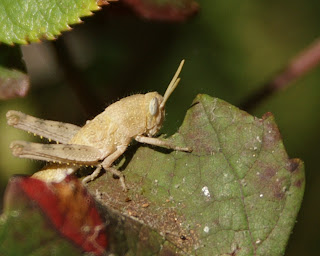 Handsome grasshopper nymph (Schistocerca nitens) digs into a leaf of California grape, Vitis californica.  I've been babying this plant for a few years.  It is planted way down deep in the jungle of foliage, not a lot of sunshine going on down there.  It's finally reached a height where it is getting decent sun and twines attractively through the fence, the mini climbing roses and over and under the mailbox.  Be kind, young grasshopper, to my fledgling grape vine.


Everybody loves a butterfly, this I know.  I was out back this afternoon and sighted a lovely gulf fritillary visiting the red pentas.  Unfortunately it flew off as I raised the camera and tried for a great backlit shot.  However, as I stood there slightly annoyed a funereal duskywing, Erynnis funeralis, landed atop the stapelia that I was standing dangerously close to.  This small butterfly, not so pretty by some standards, was patient and unafraid as I captured its image to share with you this final day of September. 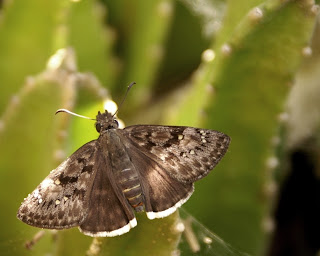 The butterfly has a nice pattern going. Most of these guys look much plainer brown to me.

Yes this one is unusually attractive. I'm sure it's not e.tristis because of the faint whitish patches near the hind wings. Maybe this one is fresher, or maybe just not so mournful as the usual ones we see.