We Interrupt This Afternoon for Dragonflies 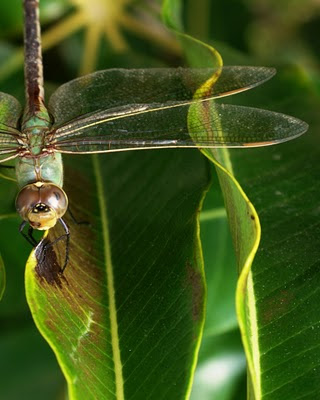 Friday there was a break in the rain and cloud cover and I stepped out into the backyard to enjoy some sunshine. 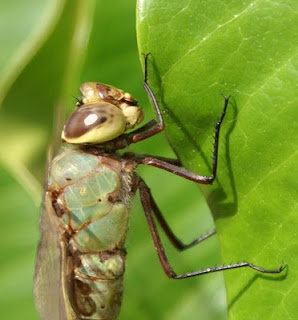 I was not alone.  This huge dragonfly drifted out of the sky and landed on the schefflera not two feet from me, right in front of my sun-drenched face.  She rested there on the leaf's edge for minutes while I admired her from all angles.  She only flew off when I reached out and touched her.  When she rose into the sky I noticed that we (the dragonfly and I) were not alone. 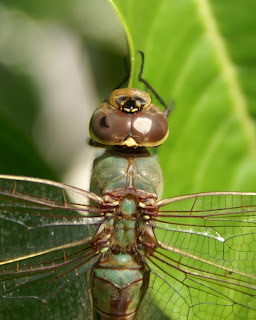 The air was full of dragonflies, at least 10 of them flying over my property.  Why they were there soon became apparent as winged termites rained from the same airspace all around me.  Termite hatches are predictable on a sunny day after a rain, and sure enough here they were.  It's disturbing to see the large numbers of these reproductives emerging from your neighbor's roof, rising into the shining sky then fluttering onto your own sweet house made of wood.  However, the air was also full of dragonflies darting after and consuming these termites.

Birds were also feasting on the termies, notably the Black Phoebes.  A trio of them were making a ruckus fighting over the termite territory over my neighbor's roof.  Surely not all the termites get eaten, but it's good to know the dragonflies (and the birds) are on the job cutting down their numbers so our beams at least have a chance.

Thanks to Kathy Biggs for making her odonata key available online.  This big beauty that visited with me during the termite rain is a common green darner, Anax junius, female.  Common, but first time seen in my yard. 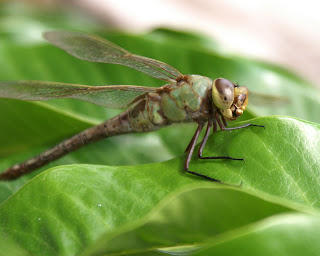 Wow, I can't get over the photos! We've had many termite hatches as well, but thankfully I haven't spotted any coming out of structures! I liken it to watching snow falling upside down...