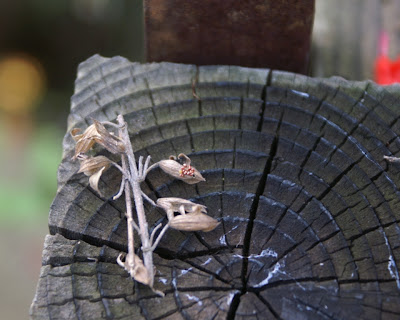 Today, the first available non-rainy day following the winter solstice, I got out and took a survey of the life forms in the yard.  It's been wet and cold for southern California and much of the insect life in evidence is cryptic.  Eggs, dead eggs, whiffs of life that once was or soon will be present.  Still there were a few buggies and others around to observe, perhaps hardier ambassadors of many others hidden away under the shrubberies or way up in the warm sun in the hedgetops. 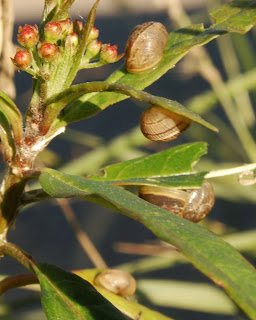 One species in large numbers unfortunately is Helix aspersa, brown garden snail.  There are lots of young ones, boding ill for our plants that will soon be putting out succulent shoots.  I am amazed at the numbers of snails crowding the milkweed plants, apparently unfazed by its toxic juices.


On to the arthropods.  Representing the arachnids are: 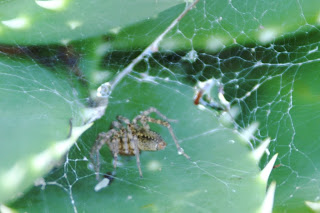 Funnel web spiders, Hololena curta, 5 or 6 of them on the porch and another one out in the aloe.
Whirligig mites, Anystis baccarum, always plentiful this time of year, found running across the picnic table, my notebook, my hand.
Peucetia viridans, green lynx spiders, had a tough year in 2010.  The two egg sacs I was aware of both failed to hatch and are still clinging pitifully to the branches where their dying mothers left them.
I saw one tiny orb weaver, likely to be Neoscona crucifera working on a small web and a small jumping spider that looked like Sassacus sp. jumping its way up the lantana. 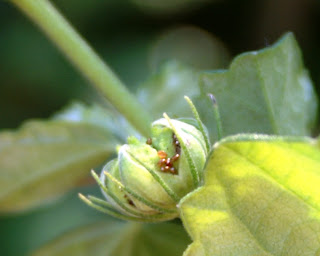 I found eggs, very likely to be Niesthrea louisianica's, on a green seed capsule of Pavonia praemorsa, Yellow mallow.  When I first noted this species in my garden in May 2007, it populated the Indian mallow, Abutilon palmeri, exclusively.  Now that plant has died, and these mallow loving seed bugs have moved onto another mallow.  Yay!
There were some other bug eggs on a dried salvia coccinea flower, and an adult bug nearby; same species?  Looks like a lygus bug of some sort.
Saw another bug adult of another species, foggy photo rules out ID.

An unusually colored Bagrada hilaris nymph hangs out on a grass stem.
Lots of cactus scale, Diaspis echinocacti, have sadly colonized a potted Opuntia cutting.  Where is my scale toothbrush?

The pittosporum psyllids of summer seem to be all gone, leaving curled leaf tips, sooty mold and probably eggs behind.
There were a few black leafhoppers on the lavendar.

Eggs of glassywinged sharpshooter, Homalodisca vitripennis, recently laid in the leaf tissue of prunus caroliniana.  Notice the thin white substance covering the eggs laid down by the female. 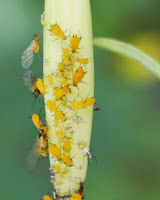 Gobs of oleander aphids, Aphis nerii, are troubling the milkweed (both Asclepias curassavica and a. physocarpus) in the front parkway while the a. curassavica in the back yard is aphid-free.  Winged aphids were present among a few of the colonies.
One Green Aphid was observed on a large sow thistle among the weed patch out back.  As you know these weeds will soon be coated in aphids, but for now there's just the one. 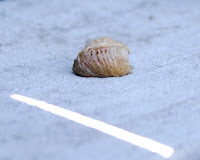 I found a mantid ootheca on the top surface of the shelf I built this fall for potted cuttings.  That was a neat surprise.  I was happy to find another one on the backside of St. Francis.  These are undoubtedly Stagmomantis californica, the mantis that stalks my garden and its statuary. 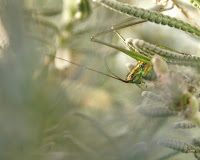 The katydids were represented by one small nymph found among the lavendar, and two clutches of eggs.  The nymph is a forktailed bush katydid, Scudderia furcata.  The eggs however are not so easy.  One bunch of eggs were inserted between the tissue layers of a gomphrena leaf; these probably are S. furcata eggs.  The other eggs were deposited along a grass stem.  I saw the female ovipositing but to my great shame did not manage to photograph this event.  She looked like Microcentrum rhombifolium, and ovipositing on the outside of the plant points away from Phaneroptera nana I believe.  The katydid mystery lives on.

One honey bee, Apis mellifera, buzzed among the still blooming acacia.
Aphid parasitic wasps must be around as evidenced by all the aphid mummies. 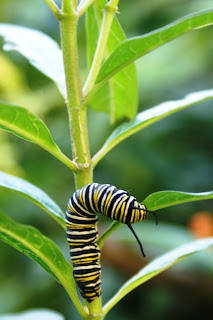 As I squirreled among the shrubbery a moth flew up and away.  Probably a Eupethicia. 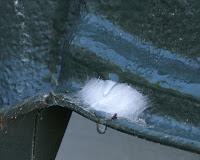 Inside the green waste bin there was a silky cocoon that looked like a moth pupa's shelter.
I found this plume moth posing prettily on a poinsettia plant.

A mourning cloak butterfly, Nymphalis antiopa, floated past the corner of my eye and up and over the fence.
Lots of No See Ums were flying around at times in small clouds.  These could have been fungus gnats.
One syrphid fly came from out of nowhere and landed on some sweet alyssum that is in bloom. 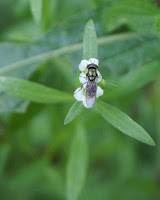 Meanwhile the syrphid pupa I know about is still pupating.

As for the pumpkin, Something bored this hole into it but so far I don't know what that creature is.