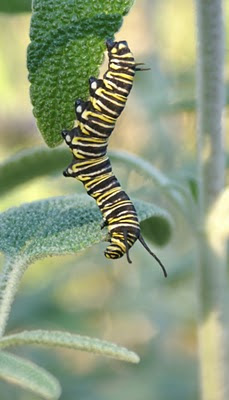 On the afternoon of January 12, a warm and inviting day here in Tustin, I realized I would be an idiot if I didn't get some gardening done.  You could say I was drawn to the task by an irresistible force; or you could say it was a very good idea to soak up some sun and get that long-delayed garden clean-up done at the same time.

The phlomis purpurea was a likely candidate for pruning.  I was told several years ago the secret to success with phlomis is to pinch back pinch back and pinch back some more.  This particular phlomis is definitely due for pinching if not regulation pruning.  But, its six-foot tall spires of fuzzy gray leaves are full of buds and flowers, so I set to work cutting back other plants around it, working my way in and up to the task of cutting it back.  As I turned my red-handled Felcos from the rudbeckias and hummingbird sage, the sighting of these two monarch caterpillars in pupation mode stopped my clippers in mid-snip. 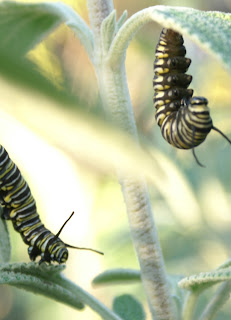 Monarch caterpillars often leave the milkweed they have been feeding on and climb other nearby or sometimes not so nearby plants to seek a place to pupate.  (By the way, they sometimes wander off the milkweed to molt, as well.)  These fat ones had traveled about 10 feet out and 3 feet up from their home milkweed. 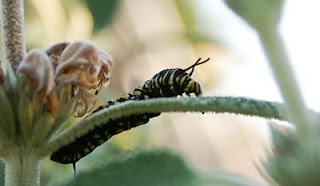 One of them wandered restlessly over the phlomis while the other caterpillar had already assumed the J position, 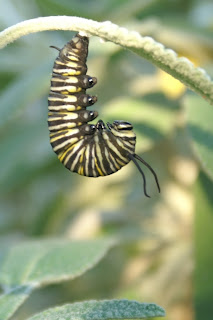 having selected a spot (the mid-rib of the underside of a phlomis leaf), spun a small silk cushion, hooked its cremaster through the silk, and proceeded to hang and await the final molt. 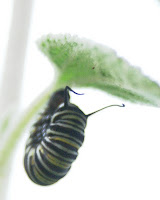 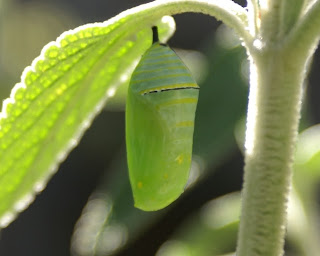 Photos of the J were taken Jan 12 at 3:30 pm; I found the pupation complete but still hardening at 10:30 am Jan 14.  I'm assuming the pupation molt occurred morning of Jan 14, so this caterpillar spent at least 1.5 days in the J position. 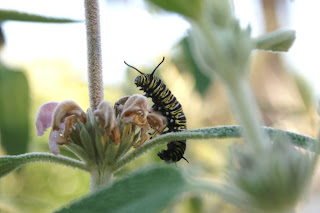 The second caterpillar wandered around until the following morning, Jan 15, when I caught it hanging in a J around 8:20 am.  This one made much quicker work of its transformation, and just 3 hours later at 11:30 it had shed its skin and a very fresh chrysalis was squirming and shining in the sun.  You can see the shriveled black skin is still either hanging on or is just caught up by the pupa's attachment point. 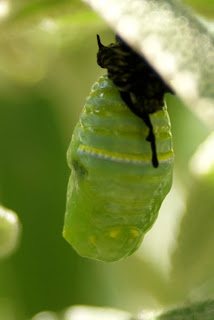 I remember thinking this caterpillar had not chosen wisely, as it seemed tenuously attached to the outer edge of a droopy leaf.  Using phlomis leaves of any type seemed ill-advised, looking down on the thick bed of dropped leaves.  But, the pupal stage lasts just 10 to 14 days usually so I was hopeful the leaves these two chrysalises attached to would hold that long.

In the next couple days our Santa Ana winds kicked up.  Though the blow did not reach the Storm Watch predicted, biblical proportion of 80 mph, it did rattle the branches a bit.  I checked on the two from time to time and on the afternoon of Jan 20 found the second hasty pupa had fallen off its attachment.  I was able to find it in the soft duff of fallen phlomis leaves.  I picked it up gently with my sweatshirt-gloved hand.

I took the five day old fallen pupa inside and attached it to a bamboo skewer with some white glue and jute string.  It had some brown marks on it, maybe damage occurred when it fell.  It is spending its days now suspended over a small plastic bowl, but when (if) it turns transparent as soon-to-eclose monarchs do I will take it out and attach the skewer to a likely shrub so the butterfly can emerge in a natural setting. 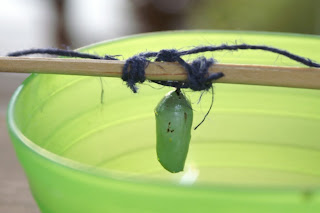 As of right now, both pupae are still green and so are not expected to produce butterflies for a day or so.  But while I was checking on them a female monarch was depositing eggs on the nearby milkweed leafs, maybe drawn there by an irresistible force or maybe it's just a very good idea on a bright shiny day to lay eggs on milkweed if you're Danaus plexippus.
Posted by vanessa cardui at Thursday, January 27, 2011

I love it when Nature finds an excuse for us to not cut back the plants!

Thanks for the fascinating photos!
I remember watching these long ago- miracles do happen.
Cynthia