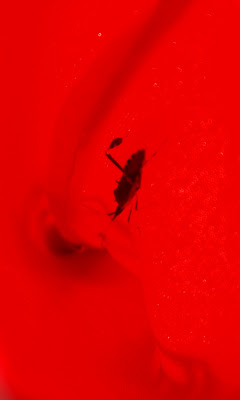 It takes awhile to put away the holiday stuff, but I generally get it done by the end of February.  This Santa hat, however, escaped my attention and has wound up sitting on a picnic table in the backyard until "someone" has a chance to put it away.  I picked it up the other day for no apparent reason (definitely NOT planning to climb up in the attic with it) when this leaf-footed bug (Leptoglossus zonatus) made its appearance from within the deep red polyester cone of the hat.

Was it sheltering there from the cold?  Attracted by the red color, so much like a ripe pomegranate?  Was the bug a believer in Santa?  Whatever the reason for its presence in the hat, the bug seemed energized by opening of its cocoon; climbed to the white brim and very abruptly and energetically flew off into the nearby sky. 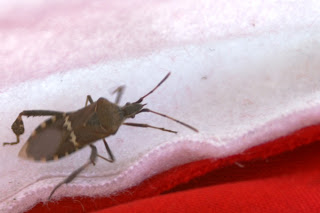 I think he was volunteering to put it in the attic for you! What a nice guy!