March of the Chenilles 2011 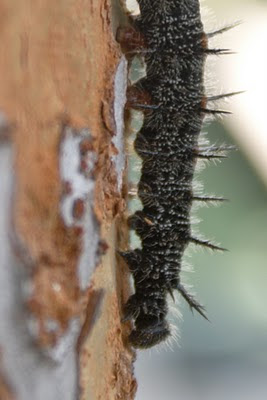 Sure enough, the Nymphalis antiopa caterpillars came out of the elm tree today in search of places to pupate.  We arrived home from yard sale-ing before noon to find them marching across the sidewalk, the street, the driveway and up the walls of the house. 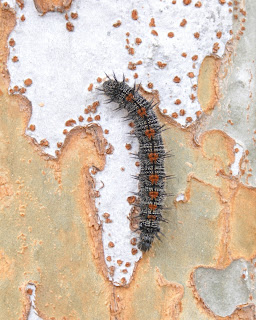 Some of them were seen crawling down the tree trunk; we thought we heard one fall into the shrubbery under the tree.  To the extent an arthropod can purposefully act, do some caterpillars mean to drop off the tree as opposed to climbing out down the trunk?

Along with quantities of droppings, we find a lot of them in the street . . . . where many are culled out by passing cars and maybe kids on scooters.

One of them was stopped on the sidewalk.  It seemed to be in one piece; I picked it up and set it down to have a look.  There is a round dark spot on its side that looks like a bruise.  This one never moved again.

Still there were plenty of healthy caterpillars that made it to a place to pupate such as the walls of my house.  They move fast across the concrete but once they start climbing they spend a lot of time investigating the surface before moving. 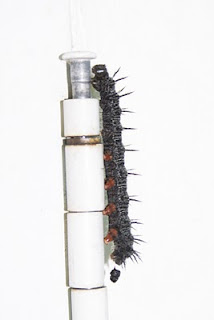 This one was checking out the hinge on my front screen door for awhile.  Later I noticed it had proceeded up to the porch ceiling.

This one was taking its time at each lap in the siding. 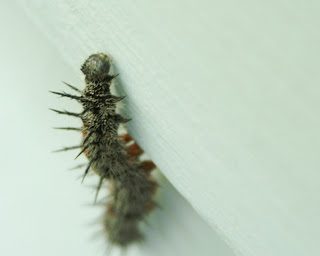 By the end of the day some were still in investigative mode and none of the caterpillars had assumed the J position. 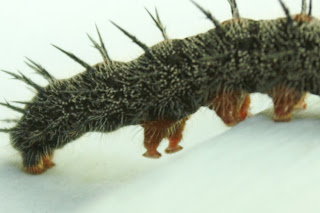 So jealous! Why do they come to your tree and not to mine? I'll be checking the arboretum trees tomorrow for sure.