I noticed these spiral pomegranate leaves the other day.

The plant the leaves were growing on was labeled Punica granatum Nana, dwarf pomegranate, when I planted it several years back.  Nana is often variable; this one has stayed fairly small (about 4 to 5 feet with light pruning), blooms nicely but not a blockbuster, and bears normal sized fruit but not a lot of it.  Aside from a few katydids chewing on its flowers from time to time and leaf-footed bugs feeding on the fruits, it has grown well on the south side of my house.  Pomegranates are often regarded as a fool-proof fruit tree because of their lack of pest problems. 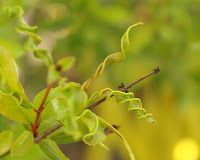 Enter the curly leaves.  Misshapen leaves are often the result of insect infestations:  either thrips (as in ficus) or psyllids (eugenia and lately, pittosporum) and even caterpillars (citrus leafminer).  These pom leaves are uniformly spiraling seemingly caused by the rolled leaf edge, but otherwise appear healthy.  When I unroll the curled edge I see nothing but that may not be conclusive because, hey, my eyesight isn't that good.  Some leaf distortions are caused by fungus (as in peach leaf curl) or even bacteria (pear blight) but in these cases the leaves look terribly sick as well as being distorted.

So I'm going to assume for the moment my leaves are merely twisted, not sick AND twisted, and that there is some insect at work on the pomegranate, causing the leaves to turn around on themselves, and keep an eye out for further symptoms or visible-to-the-naked-and-aging-eye insects. 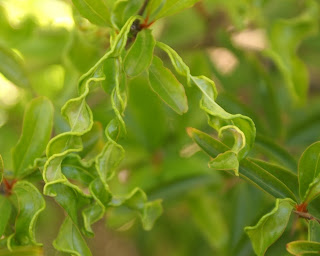 Hi, I am in Southern California and we have a Pomegranate plant with the same spiral leaves. Have you figured what is causing it? I am worried that it might be stunting growth if left uncared for. Please let me know. Thanks in advance!