Mourning Cloak Eclosure A and B 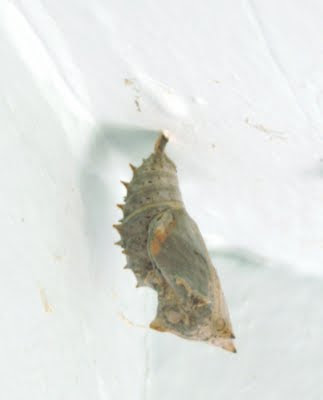 On March 15 the march of two mourning cloak caterpillars came to an end on the ceiling of my front porch, just over the door.  These two pupated within hours or maybe minutes of each other and have been hanging there next to each other since. 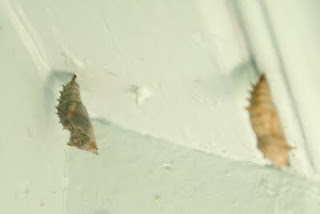 In the morning two days ago I noticed one of them had turned dark; you can see the wing markings through the pupal case.  The second pupa hanging nearby has not changed yet and appears the same as it has for the past 17 days. 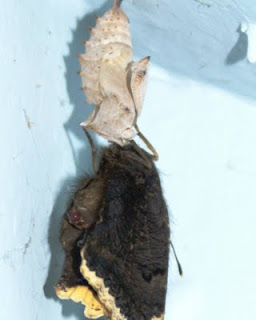 By that evening the darkened pupa had opened and I found a freshly emerged butterfly at 5 pm.  It hung from its empty pupa that evening, and next morning had taken it maiden flight to a nearby senecio. 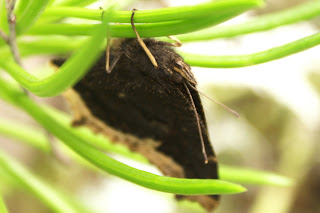 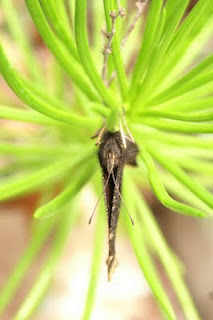 By mid-afternoon it had flown off into the wilds of Tustin.

The second butterfly eclosed today as I was sitting on the front porch bench observing a mourning cloak caterpillar, part of the ongoing second wave of maturing Nymphalis antiopa, climbing the wall.  I had noticed the pupa had turned dark, I even saw it twitch.  However, just a few minutes of distraction by this caterpillar and I missed the moment . . . again. 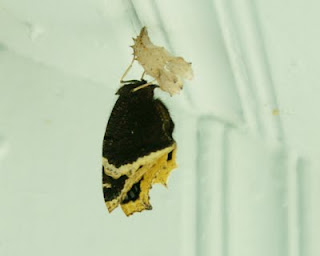