15 minutes in the sun 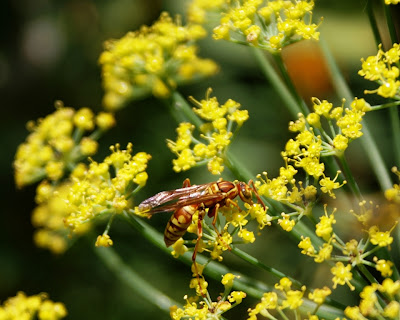 The day of solstice 2011 was the veil between the gloom that preceded it and the honest summer heat that followed.  Today the sun actually burned off the cloud cover before noon (!) and I observed what was flying around the fennel flowers that had just opened fully and were offering up nectar.  A lot of them were wasps. 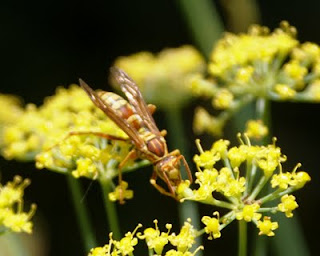 The first visitor to show up was a paper wasp, Polistes apachus.  This is one of the paper nest builders once famous for threatening visitors to my front door.  I almost misidentified this one as P. exclamans until I remembered that species is marked by its yellow tipped antennae.  This one's antennae do not have noticeably light tips.  Paper wasps feed on nectar, but hunt among the plants for caterpillars to feed their growing larvae back in the paper nest cells.  I do have a pet paper wasp nest this year but it's not on the front porch. 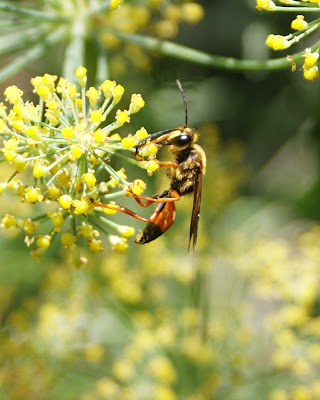 Soon a great golden digger wasp (Sphex ichneumoneus) arrived to feed among the flowers.  They don't call them great for nothing as this wasp is impressive in its size and robust appearance.  They are always "friendly" in that they never threaten me or seem agitated with my presence; not that they smile and say "hey, how's it going" or anything like that.  S. ichneumoneus digs her nest in the soil and provisions it with orthopterans (grasshoppers, katydids, crickets).  I'm keeping my eye out for the nest location, also for a great golden digger capturing prey. 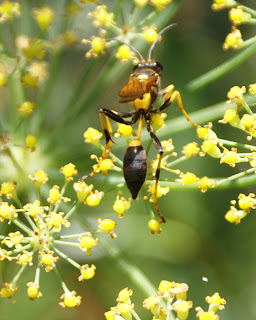 Black and yellow mud daubers (Sceliphron caementarium) also came by to feed and *ahem* meet.  At least I saw a male and female: 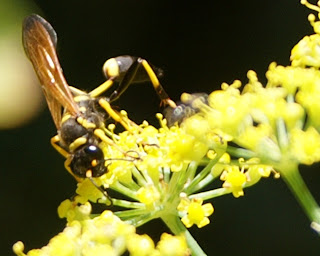 male with curled antennae; female's are straight.  The two of them came by separately and fed a bit; then one got close to the other, maybe in a mating attempt, 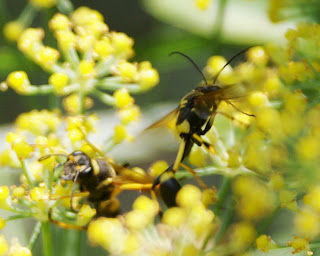 and a bit of a confrontation ensued.  Mud daubers build those mud covered nests under your eaves or in your garden shed or garage.  Inside the cells are spider prey and wasp eggs and later, wasp larvae. 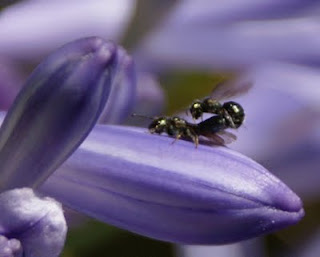 I don't know what these mating small black wasps (?) are.  Obviously not on the fennel but too good to pass up.  You can get an idea of the size by knowing that is an agapanthas flower they are on, which by the way was close to the fennel. 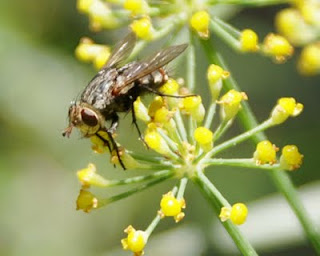 Not wasps or even hymenoptera, but also attracted by the fennel flowers were some tachinid flies.  This is probably genus Peleteria, based solely on appearance (white markings especially).  Sadly, I don't know what type of insect host the maggots of this species develop inside of, but that is the way of tachinid larvae, often growing inside of caterpillar hosts as parasitoids.  Parasitoids are creatures that feed on another living thing but unlike parasites, they usually kill and often consume the host.  The adult flies feed on nectar; they seem to really like fennel and don't seem to do it any harm.


Last but not least was a honeybee. 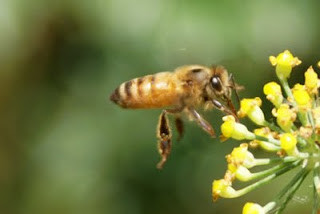 All these visitors to and near the fennel plant were observed between 11:30 and 11:46 am today, an hour or so past the actual solstice.
Posted by vanessa cardui at Tuesday, June 21, 2011