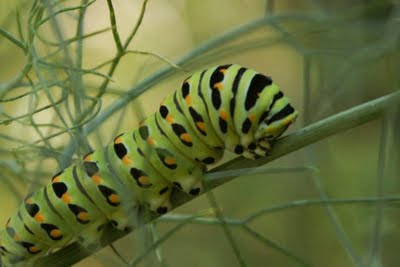 When a new species breeds in my garden, it is a moving experience.  I feel humble, exultant, proud, nervous, awed, and hopeful. 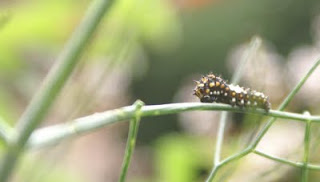 On June 19 I first noticed four small (2nd instar) caterpillars of anise swallowtail (Papilio zelicaon) on the foliage of a fennel (foeniculum vulgare) in the back yard.  I've grown fennel for several years now, but the past two years the patch has enlarged.  Perhaps it's finally reached a size acceptable to breeding anise swallowtail.  Anyway, I was really exciting by this turn of events but nervous because of the numerous caterpillar preying polistes wasps cruising the fennel.  On June 21 I checked and there were still four, and one of them recently molted. 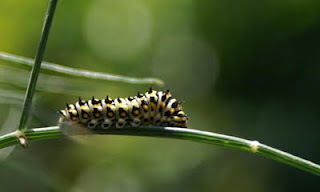 I took a short trip to Chicago for a few days and though I did ask Mr. Cardui to check on them,
I mostly left the caterpillars to their fate.
While in the windy city, I saw a spider. 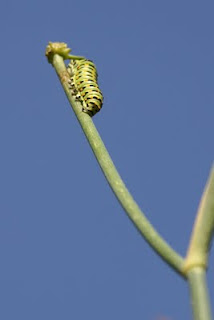 Upon my return to Tustin on June 27 I found the caterpillars to be greatly enlarged. 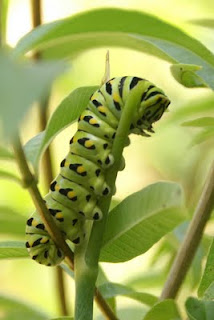 I could only find 3;
by June 30 only one of the original four was still to be seen feeding among the foliage.

I did see some black gooey droppings among the leaves; quite possibly from the intestinal purging of one of the caterpillars just before marching off to pupate . . . but where?  After the June 30 sighting I did not see any more caterpillars.  I looked all over the fennel plant, having read that these caterpillars commonly pupate on the fennel.  No luck finding any and so it seemed the wasps may have had their way with my Papilio zelicaon population.

It wasn't until July 8 that I noticed this pupa on the Eriogonum giganteum, St. Catherine's lace.  You can see how the pupa is supported by a silk lashing around the middle. 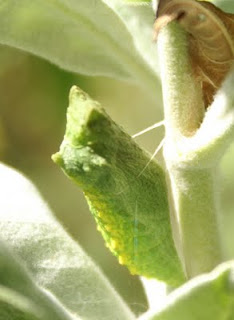 The pupation site is about 6 feet away from the fennel where the caterpillar fed. 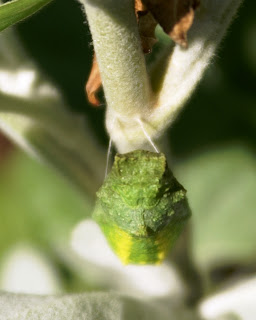 A few days later on the early morning of July 11 the pupa has changed color, indicating that eclosure is imminent.  How soon I had no way of knowing, but when I checked during lunch break around noon it looked the same. 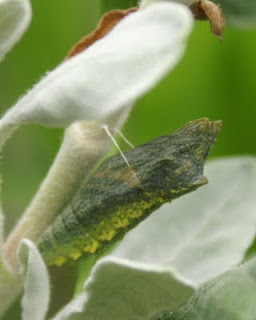 It was a sunny warm day, a good day for butterflies.  Later on, at about 1:30 I took a look and the butterfly was fully emerged, wings filled and rigid, beautiful.  I went for the camera; still there when I returned but had climbed higher on the buckwheat.  I barely raised the eyepiece to my eye when the butterfly made one beat of its wings then flew off and up strongly to the east and over my house.  I was privileged to have glimpsed it at least.

This is the empty pupa showing how it is split to let the butterfly free. 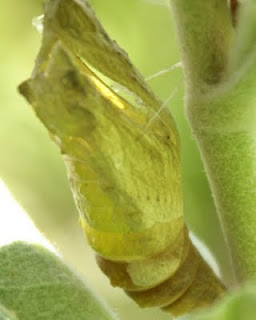 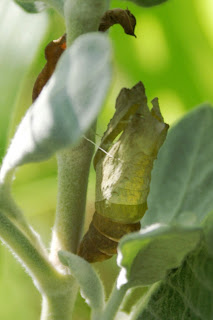 I noticed several drops of whitish fluid below the pupa, and wondered if this is meconium.  Compared with meconium of monarchs and mourning cloaks I have seen which is bloody red, if this is meconium (waste product from metamorphosis expelled by the butterfly) it seems so pure. 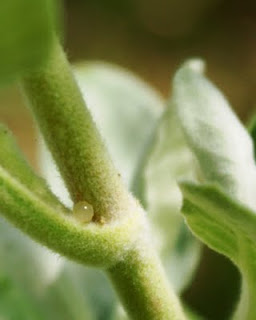 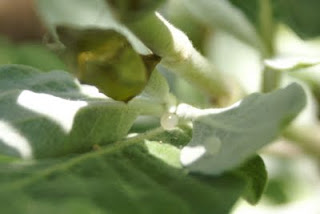 Does this have something to do with what the caterpillar fed on, the amount of waste produced, or have I simply witnessed the birth of an rarified butterfly spirit?
Posted by vanessa cardui at Monday, July 11, 2011

Thank you so much for these beautifully clear photos and the natural science lesson. Wish I had had you for my teacher when I was young!
Cynthia