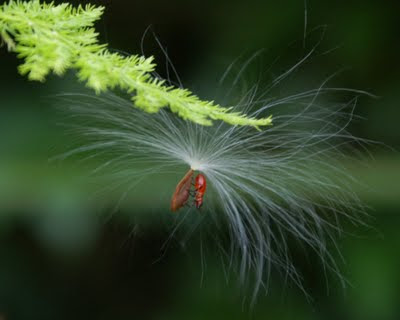 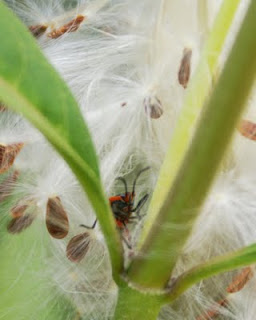 In years passed the milkweed bugs have been plentiful on the milkweed plants for several months, then the population goes down as either the milkweed declines (sometimes due to monarch caterpillar feeding) or weather changes or something known only to milkweed bugs.  In other words the bugs seem to be part of a self regulating natural cycle.  They ebb and flow among the milkweed fluff and since the milkweed needs regulation itself they seem to leave no mark in their passage. 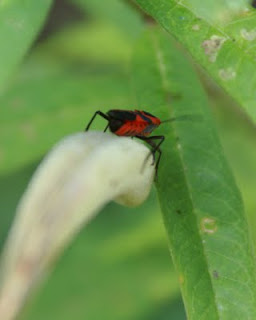 Since I noticed the first group of them in late May, and the first bug maturing to adulthood in mid-June the large milkweed bug population has, well, enlarged. 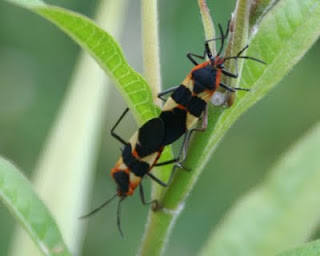 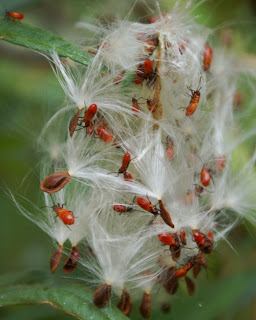 I suppose if one were freaked out by bugs in general or bright orange and black bugs specifically one might be troubled by the sight of the large conglomerations of them.  Possibly they could interfere with the success of monarch caterpillars, another milkweed specialist, by taking up feeding positions or reducing the vigor (as if that were possible) of the milkweed.  I haven't really noticed that being the case, but who knows? maybe a female monarch will avoid plants loaded with the bugs.  There have been few monarch caterpillars in evidence this summer but maybe that's not the milkweed bugs doing.  But wait. 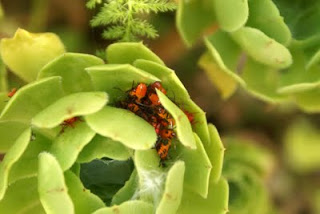 Just about the time I'm agreeing milkweed bugs are not pests I was shocked to find a small to medium mass of bugginess on an aeonium plant, an offspring of Juan's aeonium no less.  Are they feeding there?  Are they breeding there?  Since the first discovery five days ago, the bug bunch has grown in size and numbers as seen below.  Aeonium is not remotely related to milkweed, but unless these guys are just resting up for their next foray up the milkweed, I'd have to say that Oncopeltus fasciatus finds something useful in aeonium. 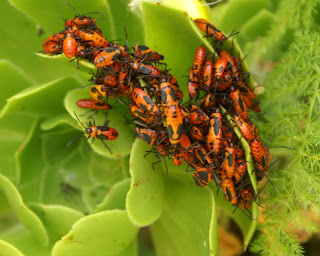 beautiful images ( and in my favorite color too ) good job!