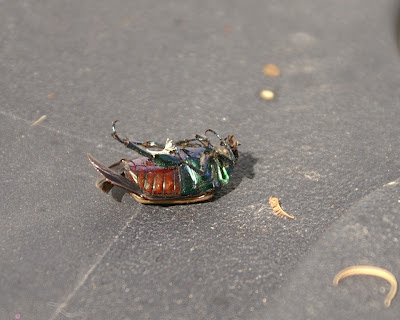 Cotinis mutabilis, also known as green peach beetle, clearly like fruit.  They buzz around the neighbor's fig tree and especially enjoy overripe fallen fruits of any kind.  Still, they are also often found bumbling among the flowers of my lemon verbena tree, eating them it seems.

You find a lot of fallen fig beetles this time of year, even while the living continue to fly clumsily under the shade canopy, bumping into the house, crash landing on the driveway.  They are likely to be ripe with eggs, or they've already laid their eggs and just biding their short hot summer time until they give it up like this one found on the lid of my non-recycle trash bin on a recent scorching afternoon.

I had the privilege of seeing a fig beetle initiate egg laying the other day.  Sweat was falling off my face in large heavy drops after a couple hours of propagating (plants) in the late morning heat when a beetle crash landed into the mulch.  She scuttled her snout end back and forth and opened a slit in the mulch, then quite quickly disappeared under.  The mulch layer heaved up and down in a small but deliberate way as the beetle, presumably, dug down to the soil beneath and deposited her eggs.  This went on for awhile, many long minutes as more sweat dripped onto the mulch covering.  I didn't stay long enough to see her exit.  Wish I had.

Adult fig beetles will continue to fly for another month or so around here; meanwhile the grubs-- under mulch, under duff piles, anywhere there's rotting organic matter next to soil--will be hatching and growing until they emerge next summer to bumble around for another season.
Posted by vanessa cardui at Tuesday, August 21, 2012