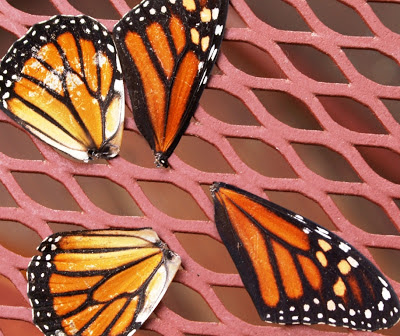 Cindy's circle of life post involving a monarch and a mantis encouraged me to get around to this:

Some monarch-eating predator (bird? rodent? mantis?) had taken the entire body of this butterfly and left the wings close together on the garden path.  That evidence itself would suggest a ground based attack rather than the butterfly being snapped out of the air mid-flight.  I gathered up the wings and held them on the expanded metal patio table for awhile; an appreciation.

On or about the same day of discovery of the wings I clipped this Lio strip from the paper:

Sometimes you acquire wings, only to get pinned to a board by someone more powerful.
Sometimes you get taken out of the game altogether.
Sometimes you get to soar wingless and unpinned in the sunlit air with rainbows and sundogs and big puffy clouds and songbirds and kites and songs and arcing arrows and helium balloons that never ever interfere with jet airplanes and zeppelins and hawks and superstars and superheroes and people with helium balloons attached to aluminum lawn chairs and dreamers and comets and all manner of other flying things.

A lot of times you sit on the sidelines watching and chronicling the ups and downs of fellow creatures.  And that's cool.

Labels: lepidoptera, Lio, predation, the observer, things I see on a walk