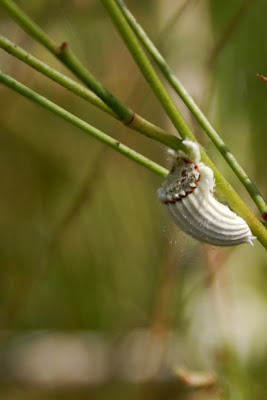 When I noticed this thing on the Gaura lindheimeri plant, out of the corner of my feeble eye I thought it was a flower.  No, of course this is the instantly recognizable (if still bizarre) cottony cushion scale, Icerya purchasi.  The insect here is that red/brown oval part while the fluted white part is the waxy egg sac containing lots and lots of red eggs. 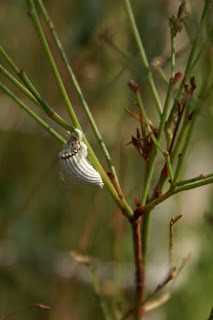 Several information sources say these scale insects are hermaphroditic; the UC IPM refers to them as females that don't need to mate to reproduce.  The first case would mean the "female" insects would either self fertilize or fertilize each other; the second would be parthenogenesis, a form of asexual reproduction.  Whichever way they go (inquiring minds want to know for sure!) it's easy to appreciate how they can achieve heavy pest-size populations.  So finding this one lone scale is a bit of an anomaly but of course new colonies have to start somewhere.  Male cottony cushion scale are rarely seen . . . but here's a great photo of one at Natural History of OC.
Posted by vanessa cardui at Tuesday, December 11, 2012

That egg sac is amazing- looks like extruded sugar cookie dough or quilted fabric. Thanks for sharing it.
Cynthia