I noticed this very young, probably just hatched, katydid exploring its new world on top of an aeonium in the back 40.  And I thought it was cool because

1.  Young katydids have super long antennae for their body size. They send them out into their world, first up then out then down, to try and get a sense of what there is out there. This guy is so small, yet goes forth anyway with nothing but its hunger, instinct, and what its antennae tell it. 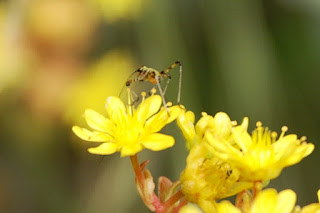 2.  This particular aeonium is also small, for an aeonium. I had it for a long time in a small pot.  Every summer it would roll its leaves into little balls at the end of the stems and turn red.  One year I thought it was dying so I planted it in the garden.  It grew some but it's still small.  And it still curls up and turns red in the dry and heat of summer. So I guess that's its nature after all. Of course right now, before the dead of summer, it looks great covered in yellow blooms. 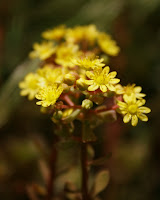 3.  Searching on the internet has become more frustrating.  Really, Alibaba, do you have katydids to sell me?  Do you have small ball-tipped aeoniums as well? I'm about to give up, throw up my hands and go purchase something, anything because after all that's all we users are supposed to do. 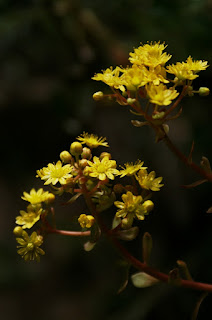 4.  But then, Eureka! My search persistence pays off and I find the aeonium I'm seeking--A. spathulatum--at Annie's Annuals.  Well, Annie doesn't have it for sale but the website had a story about "indestructibles" and how someone that works there found this aeonium on the trash heap and discovered its rolling up in a ball characteristic, etc. and I said AHA. 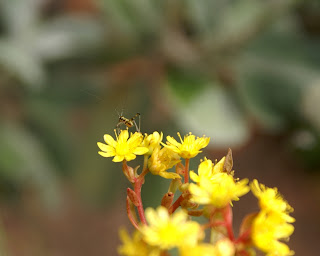 It could be hard to ID this young katydid except for the bands of white on the antennae and the kinds of katydids we have here on the estate. Yes we've seen a few new ones in recent years, but those guys do not have the white banded antennae so this must be fork-tailed bush katydid, Scudderia furcata. 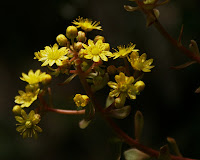 I wish Annie would sell it- I need all the indistructibles I can get.
Cynthia

Probably easy from cuttings; however mine has grown soooo slowly I'm hesitant to take any to start. Still, if you're ever in the neighborhood, give me a holler.