Red if Nezara, two if by air 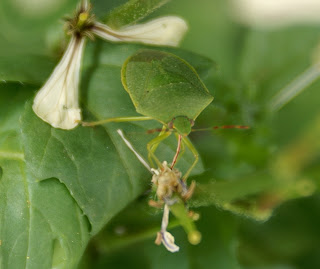 As if by spontaneous generation or possibly magic, full-grown adult green stink bugs appeared all over the arugula, and to a lesser extent all over the garden, yesterday. Since I don't believe in either of those processes, I had to wonder, "Where did these robust green stinky bugs come from?"

These bugs looked exceptionally "fresh"; as if they had very recently molted into adults. Since there haven't been any stink bug nymphs on my plants for months an 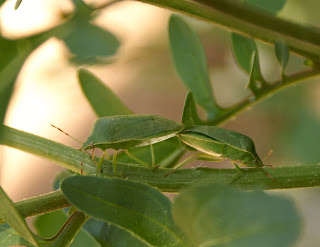 d months, the most likely source of these guys is somebody else's garden. Stimulated by a force unrecognized by us (barometric pressure? hours of daylight? nighttime temperature? population density?) the adult stinkers must have taken flight, soon after emerging, from their nymphhood home down the street or a few blocks over. From the air, they chose my lucky rocket patch as a likely breeding spot. When you're a stink bug there's no time like the present, I suppose. Here they are, caught in the act of procreating this morning.

Here's a handy reminder from the U of Arkansas, according to a poster on Bugguide: when it comes to green stink bugs, black banded antennae means Acrosternum, while red bands mean Nezara. So nezara it is, probably Nezara viridula, the nymphs of which I expect will soon be in relative abundance on my juicier plants.

Also seen on the arugula yesterday was another stink bug, but not one of the usual susp 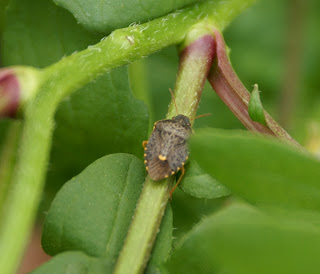 ects. No sign of it today, might have flown off in search of a mate.
Posted by vanessa cardui at Thursday, March 22, 2007