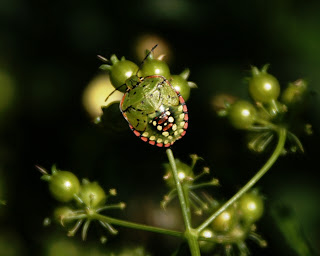 A pretty little green stink bug nymph, probably Nezara viridens, is seen here feeding on the ripening but still juicy seed pods of Coriandrum sativum, commonly called coriander or cilantro. As the herb's pungent smell wafted into my nose while I hovered over this little scene snapping photos, it occurred to me the smell is not dissimilar to that of the stink bug. While never noncommittal about stink bugs, I have remained neutral on the subject of cilantro as an edible; it's OK in guacamole or burritos, but I could also do without it. The plant is nice to grow in the garden, as it attacts huge numbers of syphid flies and small bees to the delicate heads of flowers. It freely reseeds itself, so you'll have no worries about having more cilantro next season. That is unless you, like some others scattered across the globe, hate cilantro. Apparently the taste of this herb, compared to soap, stinkbugs and several things less clean, is offensive enough to prompt haters to pen haikus of hate.

I offer my cheesy but humble haiku here:

That stink bug is so beautiful - like a piece of jewelry I'd love to own. Faberge would have done well to copy that pattern! Thanks for the photo.
Cynthia