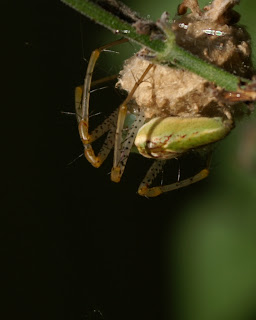 For who among us is not captivated by the idea of space travel? Romance aside, though, it's an expensive and seemingly less popular idea these days to fund space research and development. Most if not all of us here today will have to settle for hurtling through the same old space neighborhood year after year on planet Earth. Still, even the smaller among us, such as this four-legged lynx spider I nicknamed "Sputnik" (translated = co-traveler) can be exalted as we are part of a grand neighborhood filled with mysterious planets, meteorites and comets, magnetic fields, radio waves, a nuclear reactor the size of the sun, and even what we once referred to as the void of space seems to be filled with something more substantial.

Fifty years ago today the Sputnik launch sparked the so-called space race, a surge of aeronautical research overshadowed by fear, jingoism and greed but also powered by authentic curiosity, increasingly useful scientific methods and the allure of Something Big. Space is exciting and I'll get teary eyed with the rest of you when the Mars Rover bleeps its last blip. And I believe scientific inquiry into the nature of outer space and engineering problem-solving so we can go there is inevitably important.

But back to Sputnik. She has lost her third leg on the right side and all but her third leg on the left, I guess as a result of an encounter with a predator with a lop-sided sense of symmetry. Still she protects her offspring in the egg sac. If she survives she will assist them in breaking free of the sac and continue to protect them as they disperse. What % of adult female lynx spiders sustains this degree of injury? Will her injury affect the survival rate of her offspring? What is the mechanism for healing this kind of wound in spiders? Did the spider feel pain when she lost her limbs? Does she remember the pain? Is she brave? Does she worry that her offspring do not have health care? Is th 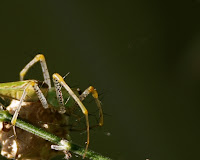 ere a limit to the number of scientific questions that can be answered; I mean, is there only so much science to go around? Do we have enough science to understand the creatures and systems on our planet and to explore outer space? If not, how can we get some more? If there was a war and spiders were potential weapons would there be enough science to study their response to grave bodily injury?
Posted by vanessa cardui at Thursday, October 04, 2007

Hi Vanessa - my daughter directed me to your blog since she was googling and researching more info on lynx spiders. I just posted (also on Thursday) about a lynx spider my daughter and I have been watching since the end of August. Momma spider is still sitting on her egg sac, and we are hopefully still awaiting to see some spiderlings soon. Thanks for the extra info you provided in several of your posts.