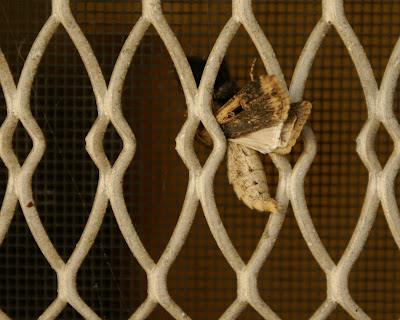 I opened the front door and noticed a furtive movement on the screen. A moth was moving in a most unnatural way, puppetlike, as if being forced jerkily against its feeble will through the hole in the grille. All of a sudden I felt a eerie chill breeze cross my face and was possessed by an irrepressible urge to get my camera. I staggered through the house bruising my thigh on the sofa arm, bumping into the back door jamb on my way to the office. It was difficult to focus with that black breath down my neck. Geez, would this light condition be considered cloudy or shady? Anyway it was apparent there was something pulling the moth's strings as it were. A dark something with fangs and beady eyes. But try as I might I could not capture that vampire's image on my digital film. It left without a trace, but not before the life was sucked out of the puppet moth, left to hang as an empty husk on my front-door grille of gothic arches.
Posted by vanessa cardui at Wednesday, October 31, 2007