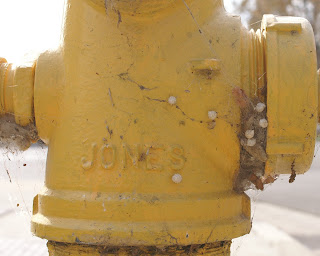 So I was walking down my street to the post office and I noticed the fire hydrant in front of the abandoned Econo Lube n Tune was still festooned with brown widow egg cases. This building has been an eyesore in our neighborhood as long as I have lived here but recently has gotten worse because it is unoccupied as well as unmaintained. The boldness of this spider says to me she has no fear of being messed with since no one has passed her way with a rake, a broom, or a leaf blower since before she was born. We have noticed a population explosion of these spiders in the neighborhood, and I suspect plenty of them are harboring within the dark recesses of the abandoned garage. Even I, the spider-tolerater-if-not-lover, think too many of these venomous Latrodectus geometricus can't be a good thing. I think I shall complain to the city, and perhaps they will turn the thing into a neighborhood arts and crafts workshop. Ha. Or at the very least an ice cream shop. Ha ha.

So I walk past the hydrant and on the other side of it is the spider busily sucking the juices out of a rather large roach. And I thought, well, it goes to show you never can tell who is the bad guy. Thank you, L. geometricus for one less cockroach on the street. Meanwhile, this image of the roach (ever the symbol of urban decline) being consumed by a deadly spider perched on a piece of city infrastructure w 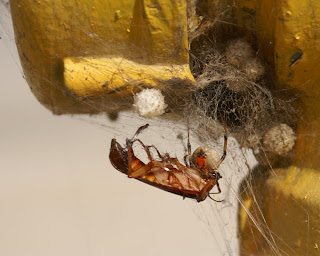 ill certainly add pith to my plea to the city to develop a pocket park, if not a community garden, on the site of the crumbling garage.
Posted by vanessa cardui at Tuesday, October 30, 2007