If the world is a stage, or at least a conglomeration of stages great and small, then we must each take up our script and play it as best we can, or get into the method and become our character or at the very least improvise. The play goes on and we can't let our fellow creatures/players down. Murgantia histrionica, commonly billed as the harlequin bug, seems destined by its nomenclature to fulfill its role as a brightly colored stink bug with gusto.

The stage was set in mid- 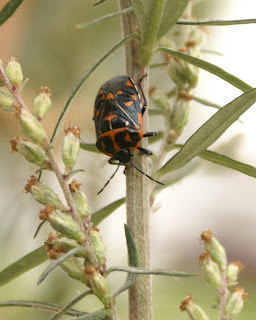 summer when our parkway was seeded with sweet alyssum, Lobularia maritima, a member of the mustard family. Plants in the mustard clan, also called crucifers due to their cross-shaped flowers, are the favored food of harlequin bugs and sweet alyssum is no exception. As soon as the alyssum began to grow, the troupe of bugs showed up and started unpacking their stuff. A female harlequin arrived right on cue to lay eggs: two neat rows of six barrel-shaped eggs in each (precisely as described in the stage directions) on the nearby Sweet Annie in a nifty bit of improvisation. The artemisia stem with the bug eggs waved in the breeze until they hatched and the little ones dropped off into the now thick bed of alyssum food below. The bug nymphs sucked the sap of the plants, living a life of gluttony and occasional molting unseen among the overgrown and seedy alyssum. But in autumn a sudden storm chopped the alyssum plants off at the ground, tossed them onto the sidewalk and then into the green waste bin. Some bugs were lost in this disaster but most survived by performing their well- 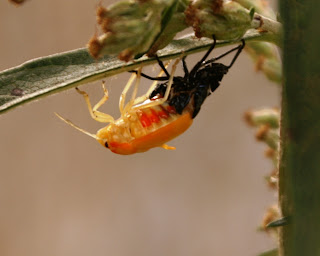 known stop and drop stunt, in which the bugs let go their plant at the first touch of the pruners and drop motionless to the ground. The storm passed and the displaced bugs climbed another nearby artemisia to molt in shades of bright orange, mate, lay eggs (this time the rows are a bit skewed but still in the requisite 2x6) and possibly have a look around as the next crop of alyssum sprouts below and the ink dries on next season's scripts of My Life as a Pentatomid Bug.

Harlequin bugs take their common name from their gaudy coloring's resemblance to the Harlequin character's patchwork outfit and red-black motif. Acting credits aside, the bold coloring serves as a warn 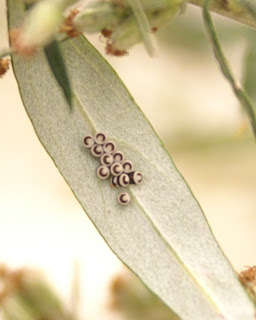 ing to predators and protection to the bugs. As they feed on crucifers the bugs sequester glucosinolates (Mustard oil for example) from the sap which when concentrated render the bugs bad tasting or toxic. M. histrionica (love that specific name!) is said to over-winter in the adult stage but I will be watching to see if these conform. Our southern California winters are so mild (last February notwithstanding) bugs and other creatures are tempted to act in ways more native to springtime. While directed by nature to feed upon crucifers, harlequins will improvise if necessary; although I believe the bugs are using the artemisia mainly as shelter not food, as they have begun to migrate back into the alyssum to feed.
Posted by vanessa cardui at Wednesday, November 21, 2007