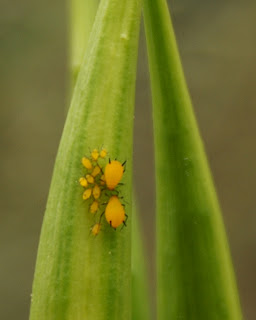 The Asclepias curassavica I planted years ago has come of age; it has established itself on the estate; it is on the verge of becoming what some might call a pest but I like to think of as self-sustaining. As the milkweed patch has grown, a community of insects has dug in and calls my milkweed patch home.

The thick gooey alkaloid latex of milkweeds gives the gardener an itchy rash, but its purpose is to discourage animals from feeding on the plants. But not all insects are deterred; some are dependent on milkweed as their only food; some include milkweed in their preferred food plants; some tolerate the milkweed latex; some prey upon those feeding on the milkweed; some feed on nectar and pollen; and some just happen by, using the plants as a resting place. 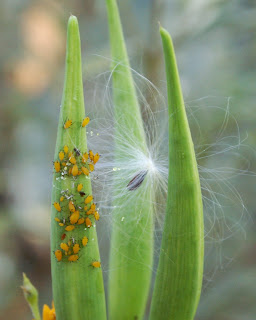 phids, Aphis nerii, spend their lives feeding on oleander or milkweed , reproducing parthenogenically (that is, without benefit or need of sex), and occasionally flying off (winged individuals morph when the colony is overcrowded or the substrate is no longer sustaining). The aphid colonies start small, with just one or two and grow from there. In previous years these colonies would start up in early spring, with a second wave in early summer and the numbers of aphids soon controlled by predators and parasites. This autumn a few colonies started in the usual way, but since then have grown and spread explosively. Even ordinary people walking by my garden notice the aphids and cross the street to avoid them, sometimes grabbing a child by the forearm and jerking him or her out of harm's way. Grown men's jaws have dropped at the grotesque quantity of aphids waggling their bodies along the stems of the otherwise 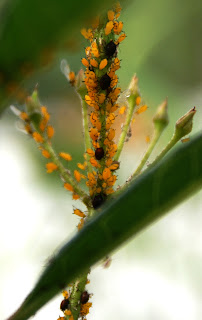 You can see some of the aphids have been parasitized by braconid wasps. Each lifeless mummy is the exoskeleton of an aphid that has been consumed from the inside by a wasp larva. The wasp breaks free of the mummy when it morphs into an adult.
Posted by vanessa cardui at Wednesday, November 28, 2007

As far as I know the aphids have a term with sexual reproduction before the flying off period, so the ones flying off are not parthogenetically reproduced, this way they can keep the genetic diversity. But I know it regarding the European aphids (I'm Hungarian), there might be American species with fully parthogenetic reproduction.
By the way your blog is great!

The sources I have read agree this species is obligate parthogenetic; I do not have the expertise or time to prove this by observation so will have to trust that information for now! I have observed the winged form arising after the colonies become crowded or when the plant is in decline. This species is quite prevalent and so I guess this reproductive system, mysterious as it seems to me, works quite well for the aphids. Thanks for your comment.