An Egg, For Your Consideration 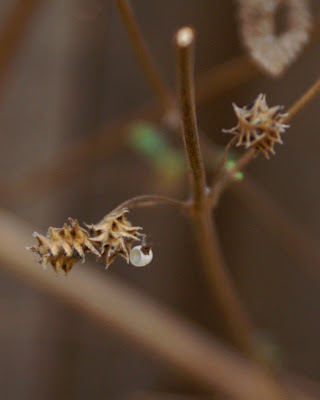 Here is an egg of . . . something . . . . proffered up it seems by some dried bracts or inflorescences of Aloysia wrightii, a sweet southwestern plant commonly known as oreganillo, or Wright's bee bush, spicebush, desert oregano and even High Mass. Not too sure about that last evocation, but the other names embody either the plant's aromatic leaves often used in cooking and/or the sweet smelling flowers that attract and nourish bees.

My "High Mass" is not entirely leafless right now. Like many plants said to be deciduous, here in southern California this one does not lose all its leaves naturally but waits for the gardener to prune back the long twiggy branches and the leaves still hanging on. After I get around to that in the next week or so, it will be ready and time for it to burst out in fresh new growth and flowers. It's not a super showy thing, no rich red or purple robes or shining gold and silver, no marble altar to lay offerings before. Although it does speak its name in Latin, Aloysia wrightii is more like a wanderer in the wilderness singing a simple song of praise. This one just happened to shelter a small creature's egg until one day it hatched.
Posted by vanessa cardui at Tuesday, February 12, 2008