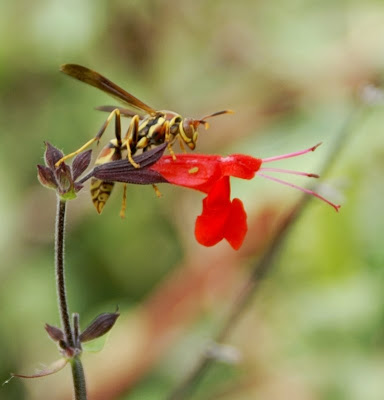 On a few recent sunny days I saw paper wasps (genus polistes) about their business of being paper wasps in spring, and took some photos. I had kind of assumed they were all the same species but when I examined the pictures closely and compared them to identification guides it's (fairly) obvious they aren't. All polistes (20 or so species in N. America) are similar: the usual yellow-orange-brown-black wasp markings, slender waist (though not as slender as some wasps but not as thick as others), large size, and distinctive nests comprised of papery cells. Still there are differences, even if some could only be verified by an entomologist with a pocket scope and a very cooperative wasp.

The first wasp I believe is a polistes exclamans. That 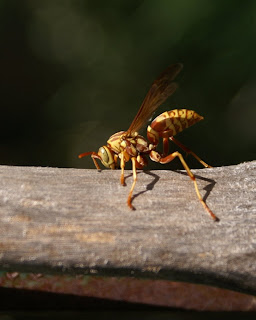 species is common around here and the yellow-tipped antennae are an identification mark for it. This wasp is visiting a salvia flower, as paper wasps often do, either in search of nectar or insect prey for their young.

The second wasp is gathering wood scrapings for her nest off an old wok utensil that hangs in the garden. This one is polistes apachus, based on the all-brown antennae and the fancy markings along the sides of the abdomen.

This third one is checking out the view from the screen door. Yellow-tipped antennae point to p. exclamans, but the pointy mostly yellow abdomen could suggest p. dorsalis californicus. So I'm not sure on this one. Except I am sure I will not be allowing any of these polistes to camp 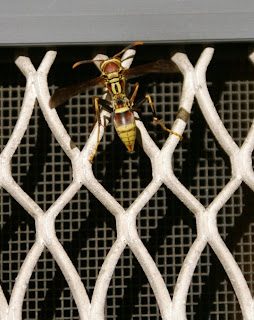 on the front porch this year. Roof overhangs and porches are some of their favorite nesting spots. While paper wasps aren't very aggressive they tend to put off the occasional visitor; and it's usually the wasps who lose. Which doesn't seem especially fair.
Posted by vanessa cardui at Thursday, March 20, 2008