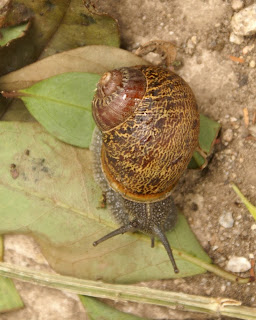 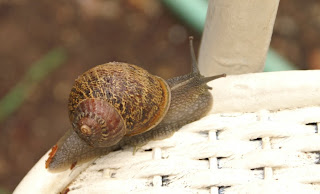 There usually aren't any snails in the back garden, so I was a bit surprised to find this particularly large and attractive helix aspersa crossing my path during snail patrol yesterday. I set it on the seat of my mom's old bouncy chair, intending to deal with it (i.e. carry it to the front yard and toss it into the street for the crows to eat) after checking around the rest of the garden.

By the time I got back to it, the snail had moved down the leg of the chair toward the safety of stuff on the ground. I picked it off with some small difficulty; the suction to the smooth chair leg was pretty strong. As I held the creature in 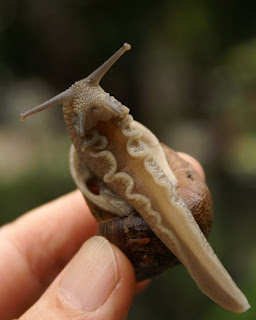 mid-air, it assumed a series of athletic and amazing poses. The snail's foot ripples with musculature and slime; the skin (do I call it skin?) is decorated with ridges and bumps making it look armored and tender at the same time. The four tentacles move with what seems like curiosity, although the visual sensors ("eyes") themselves are blank and non-expressive. The shell is beautifully colored, richly patterned and perfectly formed with the whorl on the right. The pneumostom 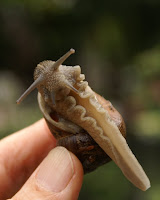 e, the breathing pore seen open in some of these pictures, is on the right side of the 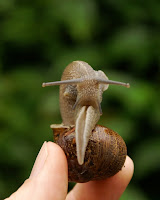 animal tucked under the shell's edge. You can make 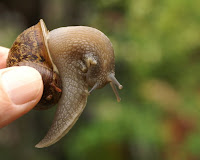 out the mouth opening in the first head-on picture, which is the part of the snail anatomy (unless appetite is an anatomical feature) that gets it into trouble with gardeners. Must protect my rudbeckia trans 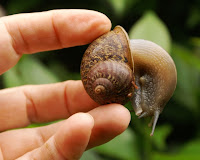 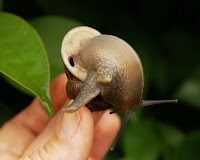 After getting to know it, though, I didn't have the heart to toss this snail to the birds so I let it go in my neighbor's front yard. Sorry, Neighbor! But if I know snails, this one will make it back to my more gastropodically interesting yard, mate (if it already hadn't when I interrupted), and lay eggs under the sedum before the week is done. 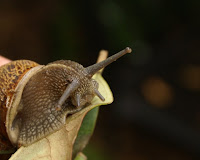 aw, a happy ending for the snail. =) I like the last pic--things are back as they should be (in a snail's world), cruising along a leaf. Interesting stuff--never looked for a snail's mouth before.

Noooooo! Don't succumb to the trap of identifying with your tormentors!

Thanks, Aydin. Coming from you that is a huge compliment.
To tell the truth, I have a hard time killing anything. Most pests in my garden are kept in check by other inhabitants so I don't have to kill them. Earwigs and sowbugs become pesky. I admit to using chemical very occasionally (less than annually) to cut down the numbers of these. House flies and mosquitoes I have no trouble killing; maybe because they stage direct attacks on my person so eradication is justified.