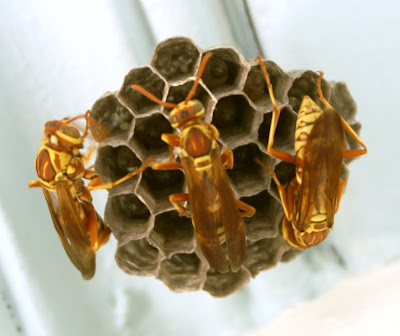 Now there are three adult polistes wasps tending the small papery nest on my front porch. The founding female (an adult wasp that mated last autumn and hibernated somewhere in the yard) was first noticed by me with her 15 cell nest and eggs in the beginning of April. Her nest is now being tended by two more adults, possibly so-called joiners which are over-wintered fertile females and likely to be sisters of the founder; they join up to share the work of building and tending the nest in a non-competitive way. The two could also be subordinates, or possible usurpers (fertile females that attempt to take over an established nest), but the behavior of the triplets leads me to think they are not these.

The wasps are fairly friendly. They allow me to get close to observe them and take pictures. Aside from the occasional alarm posture (the wasp raises her head and 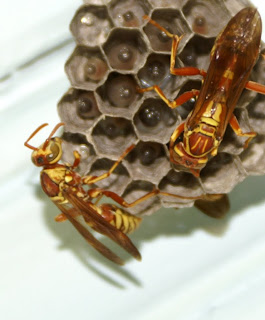 thorax off the nest 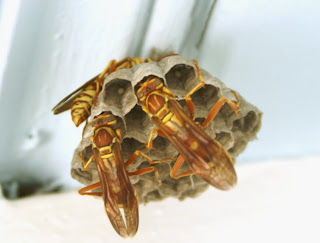 surface toward the offending human) the three go about the 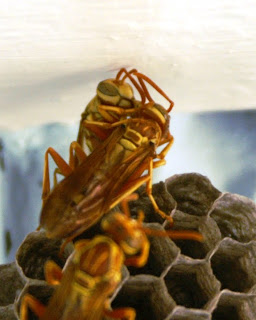 ir business as I carefully watch. They seem to take turns resting on the top surface of the nest, between the nest and the ceiling of the porch. Probably this is less strenuous a position than clinging to the cell openings and hanging head down. Sometimes two of them will engage in what appears to be grooming each other, stroking the antennae of the other and clasping each other with the front legs for a short time. But most of their time is spent feeding and attending to the larvae. You can see various sized wasp larvae here, with some of them g 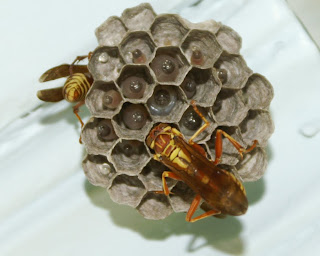 etting close to filling up their cells.

Notice the wasps' antennae are solid brown. These are polistes apachus, where the paper wasps on my porch in previous years have been polistes exclamans, which are similar in appearance but identifiable by their yellow-tipped antennae. What happened to cause a species shift in my front porch wasps? For one thing, in summer 2008 ago Mr. Cardui exterminated the p. exclamans nest due to the growing aggression of the burgeoning adult wasp population. Are p. apachus more docile? Time will tell, perhaps.

This nest seems to be taking longer than usual to develop; the larvae seem to be growing slowly. I have also noticed very few caterpillars on 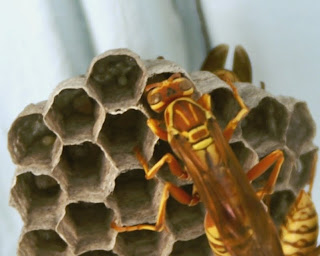 plants nearby. Maybe the upsurge in wrens (two nests within earshot of my front door) 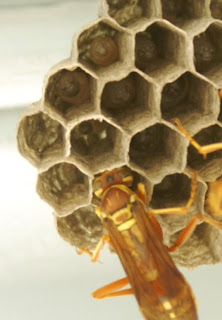 has resulted in less prey for the wasps. Or maybe its just a bad year so far for caterpillars.
Posted by vanessa cardui at Tuesday, May 25, 2010

Their coloring is amazing! I wonder if all the rain is hurting the caterpillar population, but allowing the migrating birds to stay longer?