Another Fly Went By 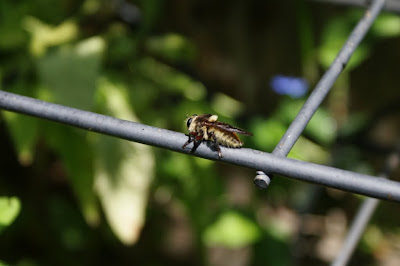 While I was waiting for the hover flies to alight on buckwheat flowers so I could actually see them, a large thing flew by my head in a characteristic way. This robber fly, Mallophora fautrix, is hairy and has bee-like markings, and might be mistaken for a large bee if not for its completely fly-like flight. As seen here, after passing my head it alit on a wire rack. These flies aren't that common around my garden, but this time of year I sometimes see one. The fly will land on a twig, or wire rack that mimics a twig, in open air to watch for prey (usually bees) passing by. The fly will jump off its perch in direct strong flight after the prey, capture it and return to its perch to feed. I wonder if Mallophora fautrix is territorial, which wou 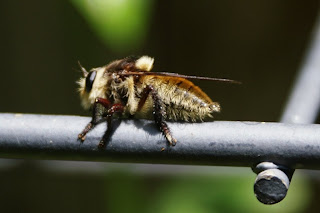 ld be one reason why I never see more than one of them.
Posted by vanessa cardui at Friday, July 30, 2010