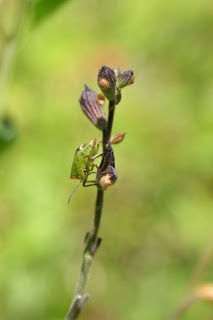 Update:  I suppose I should preface this post with a clarification that this is NOT about the brown marmolated stink bug, which seems to be wreaking havoc in the east.  This is about our friendly green stink bug, Nezara viridula, which also eats plants.  I've never seen aggregations of n. viridula or really found them to be very pesky at all.  They do stink, however.  If interested, read on.  Info on stink glands is same for both species, btw.

Here are two stink bugs, Nezara viridula, in different stages in the back garden. The nymphs go through several variations of colors and patterns. This one is found on a flower of hummingbird sage (Salvia coccinea). The adult stinker is seen here peeking around the white leaf of the yet-to-bloom (maybe next year?) Eriogonum giganteum.

Why do stink bugs stink? Two glands located between the first two pairs of legs under the shield-shaped pronotum emit compounds composed of aldehydes designed to scare off or simply offend would-be predators or molestors of stink bugs. If you dare, you can grasp a bug by the sides and turn it over to actually see the openings where the stink is emitted. Interestingly, both cilantro and cinnamon as well as vanilla and butane owe their scents to aldehyde compounds. Do you like the smell of stink bugs? Do you like the taste of cilantro? Does butane remind you of sweaty feet? Given the diversity of aldehyde odors, it's weird that stink bug odor is offensive to a range of creatures from mantids and wasps through birds to humankind. 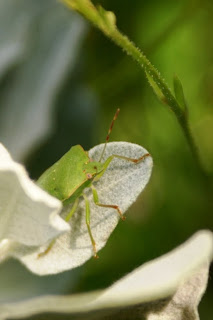 Yet another reason why it is completely rational to hate cilantro.
My Eriogonum giganteum didn't bloom the first year, but did send up really late season flower stalks, which I cut off in Winter when it was clear they wouldn't bloom. Now you can't see the plant it has so many flowers. If you bought it small (4" container?) it's probably just getting established.

My 2 e. giganteum were 1 gal size when planted last autumn. They have grown really well, look healthy. I have a feeling next summer will be very rewarding.

I am on the fence when it comes to cilantro. But then, I don't mind stink bug smell either. I think cilantro tastes OK but it's not something I purposefully go after. Given that, I guess I like stink bugs more than cilantro, eh?