Not So Forgotten Pollinator 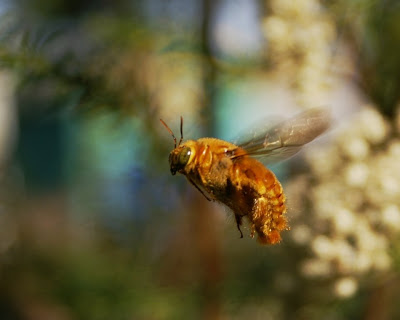 I was sitting out in the garden this afternoon reading The Forgotten Pollinators, a book about the status of pollinator/plant relationships in various environments around the world.  My reading was interrupted by loud buzzing; I looked up to see the expected male valley carpenter bee (Xylocopa varipuncta) patrolling the crown of the tallest phlomis.  The males do this in the late afternoon, hoping to attract a female with which to mate.  This particular male continued to cruise in and out of the phlomis, with occasional forays into the nearby alyogyne, for a long time.  I got chilled in the late afternoon shade and went in before the bee gave up his vigil.  You rarely see the male bees enter a flower to feed, or even pause for a moment on a twig.  Here is the male's territory; you can barely see him in the lower center portion, restlessly buzzing around. 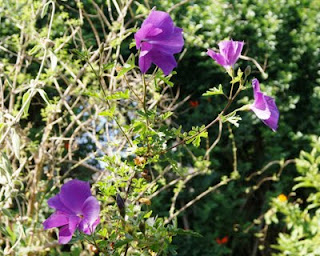 The females, meanwhile, are most commonly found in the morning buzzing loudly inside of flowers, often mallow family flowers such as abutilon, alyogyne, lavatera, hollyhock etc.  They seem to like those wide open cup-shaped blooms.  These bees are supposedly good for pollinating tomatoes; the buzzing vibration triggers flowers to release the pollen for the bee to gather to provision her nest and meanwhile pollinates the flower's ovules.  I am hoping for a good tomato crop this year so I'm glad to see the bees around.  Anyway, I have yet to see both sexes in flight at the same time, but that doesn't mean I'll stop looking; maybe I'll hit the jackpot and see them mating some late afternoon.

So it's hard to read in my garden with so many potential distractions, but I did learn that bumblebees are the premier tomato pollinators, and are being bred expressly for hothouse tomato culture.  Since tomatoes don't produce nectar these captive bumblebees are fed artificial nectar.  I rarely see bumblebees around; I'll have to rely on the carpenter bees to get the job done.

I was inspired to rescue a likely stump out of the soon-to-be-split wood pile and plan to set it out in the garden as a hopeful nesting spot for bees.  The stump is pine, one of the wood species said to be preferred by Xylocopa females to drill their nesting tunnels in.
So, first sighting of male Xylocopa varipuncta this year was a few days ago.  The females were in flight at least a month earlier when the wisteria was in bloom but actually haven't been in evidence lately.
Posted by vanessa cardui at Sunday, April 24, 2011

That's such a great shot of him hovering! I actually saw one of these guys in my back yard today, and I was trying to take a picture of him hovering just like this, but every time I tried to focus, he would move!

That is an amazing shot! Love it!

Also, now I have another book to add to my list of things to read.