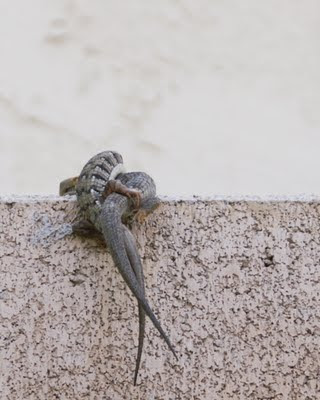 Mr. Cardui has developed an eye for the smaller, finer things in life over the years.  The other day he brought my attention to a pair of mating southern alligator lizards (Elgaria multicarinata) on top of the block wall between us and the guy next door.

The first thing you notice is the tails entwined.  Then I went up the ladder and closer for a side view and almost swooned when I saw they were holding hands.  I hate to assign human values to animal behaviors, but is that cute or what? 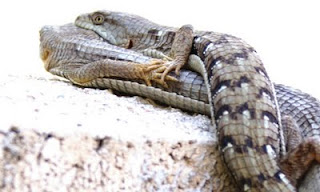 Then I repositioned the ladder for a shot at the pair's other side.  Here you see the other side alright, the one in which the male grasps the female's head in his jaw.  The two maintained this position until nightfall and beyond possibly . . . I stopped watching and went inside to do human things.  The lizards were gone next morning. 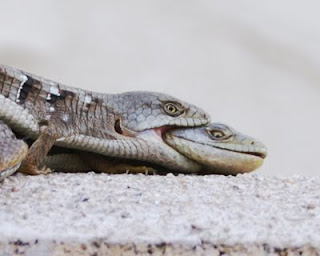 Tail twining, hand holding, head biting.  Lizard love is in the air or at least on the wall.
Posted by vanessa cardui at Tuesday, May 03, 2011

Great shots! I've come upon mating alligator lizards in the ivy or other secluded or covered areas, but I've never seen them out in the open like this.

The female looks less than thrilled by the whole ordeal.