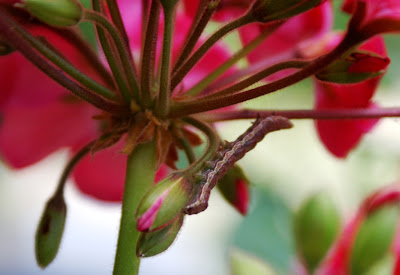 Tobacco budworms (Heliothis virescens) are good at hiding among pelargonium flowers and buds, both by taking on the color of the flowers, flower stems or leaves and by mimicking the shapes found in the flower clusters.  The fact they like to hang out deep within these big clumps of flowers doesn't hurt to keep them hidden to the casual eye at least when they are small little buggers.

But as they grow they must eat more.  And as they eat they must poop; and the poop obeying the law of gravity, filters down and out of hiding.  I found lovely green and rose colored H. virescens poop on the pot edge and sprinkled on a leaf, alerting me to the growing presence of the caterpillars I knew must be there. 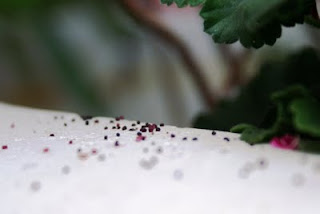 Taxonomy note:  When I first posted on this species in 2007, it was named Helicoverpa virescens, but has been assigned to a new genus heliothis.  Helicoverpa zea, corn earworm, was an alternate id based on the reasoning stated here.  But on reconsidering I believe these to be H. virescens the polyphagous tobacco or geranium budworm. 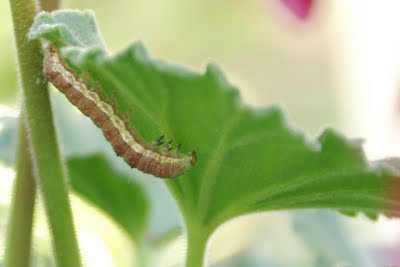 According to Featured Creatures at the U of Florida this caterpillar eats a lot of stuff, "attacking such crops as alfalfa, clover, cotton, flax, soybean, and tobacco. However, it sometimes attacks such vegetables as cabbage, cantaloupe, lettuce, pea, pepper, pigeon pea, squash, and tomato, especially when cotton or other favored crops are abundant. Tobacco budworm is a common pest of geranium and other flower crops such as ageratum, bird of paradise, chrysanthemum, gardenia, geranium, petunia, mallow, marigold, petunia, snapdragon, strawflower, verbena, and zinnia."  Whew.  I always find it among the pelargoniums in April and May, especially when the poop blows its cover.

By the way, tobacco budworm is also cannibalistic; as the caterpillars grow they sometimes attack and feed on each other.  Something more interesting than poop to keep an eye out for. 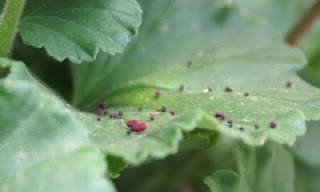 Great post, and your pictures are stunning! are these all from your own garden?

The mission of this blog is to document, comment upon, wonder about and be amused by creatures (mostly insects and spiders) on my small estate in Tustin, CA. The majority of posts and photos are within that definition. Occasionally I post on other places I visit, and I'll tell you where those places are.