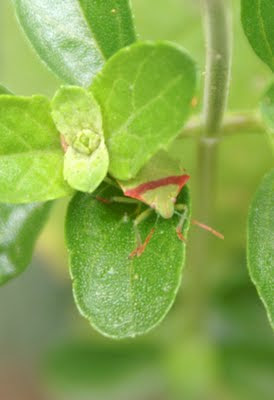 There is an explosion of bugs happening in the yards now, not only of numbers but of species.  In particular, the true bugs of sub-order Heteroptera are going nuts.  These two, a small sampling, were found in close proximity both location wise and color wise.

The stink bug on top is Thyanta pallidovirens, red-shouldered stink bug.  I don't think this species has ever visited us before unless it was one of the less colorful variants.  Smaller considerably than our usual green stink bug (Nezara viridula). 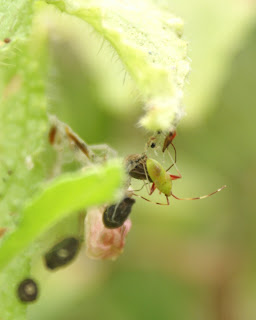 The bug hanging almost spider like from a borage seed is Creontiades rubrinervis.  It looks as though it was feeding on the seed, but this group of bugs (Mirids) is most commonly found sucking plant juices and many of them are crop pests.  Heteropterans go through a gradual, or hemimetabolous, metamorphosis.  As they grow they molt and change shape and/or coloration until the final molt produces a winged reproductive adult.  This one is a sub-adult; you can see the wing buds.
Posted by vanessa cardui at Saturday, July 16, 2011

Love the red stripe on the Thyanta! Nature never ceases to surprise. Cynthia