The dwarf pomegranate did alright this year, seeming to recover from the mites and twisted leaves.  Also reinforced its reputation as drought tolerant, as it received very little supplemental watering through this drought-infested year.

There's something fascinating about a cluster of bugs, morbidly fascinating I suppose.  This is a group of leaf footed bugs (Leptoglossus zonatus) enjoying their adulthood on one of the small pomegranate fruits.  Note the zigzag pattern across the wings and the two yellowish spots on the pronotum (just behind the head) as identifying marks. 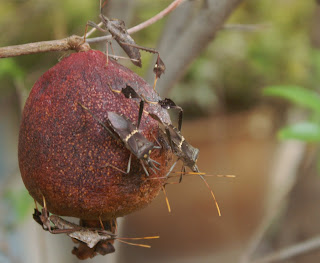 Leaf footed bugs are said to overwinter as adults, hiding out in groups in protected places like my woodpile or tree bark, or even within fallen pomegranate fruits and then re-emerge when the spring warms up to feed, mate and lay eggs.  In our warm climate, though, I've seen newly hatched ones in autumn.  So probably there's some of both (overwintering and multi-generationing) going on.

These bugs are considered pests of several crops, including and especially pomegranates.  They have the ability to feed on leaves, shoots, fruit and even seeds with their piercing mouth parts.  I've seen them in my garden on myrtle, opuntia but especially pomegranate but never at a population level approaching pesky.  Just interesting. 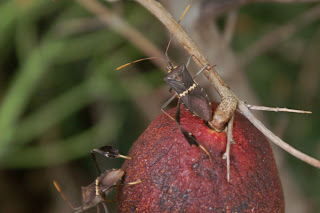